A unique campaign aimed at tackling the problem of New Psychoactive Substances – the so-called “legal highs” – has been launched in Kent.

In a co-ordinated series of raids, officers from Kent and Medway Trading Standards, with the support of police, seized 424 samples from 20 shops across the county and suspended the sale of a further 1,443.

Last month most of the shops received letters warning them they faced investigation. Trading Standards officers believe existing consumer laws could be used to stop the products being sold. It is the first time in mainland UK that this area of the law will be tested and it would force sellers to display clearly all ingredients on packets or face prosecution.

Trading Standards claim these products fall under the General Product Safety Regulations 2005 which prohibit any unsafe product from being supplied. They believe that, irrespective of disclaimers such as “not fit for human consumption”, the stores are aware that once sold, they will be consumed.

That means to comply with consumer law, traders must now know precisely what is in each of the products they sell and what risks are associated with the ingredients.

Karen Audino, whose son Jimmy Guichard, 20, died after taking synthetic cannabis believed to have been bought in a shop in Chatham, said she welcomed the move.

She said: “Anything that protects people and stops families like mine from being torn apart by these so called legal highs is a good thing.

“I don’t believe any of these products are safe and now that theses hops are being told they must operate within the law I hope it will go some way to forcing their closure.

“My son’s life just slipped away and that is something I want no other mother to have to go through.

“It’s terrible that people can just go into a shop and buy these products as easily as sweets or a newspaper and I hope the action taken today will help put an end to these awful products. They destroy lives and destroy families.”

The substances in question produce similar effects to illegal drugs, such as cocaine and ecstasy, but that are not controlled under the Misuse of Drugs Act. They cannot be sold for human consumption, but are often sold as bath salts or plant food to get round the law. 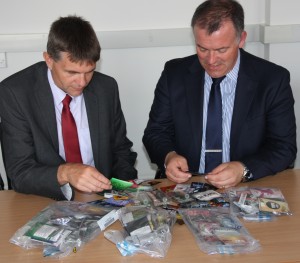 KCC Trading Standards manager Mark Rolfe, pictured with fellow TS manager Richard Strawson, said: “We have been concerned for some time about the dangers posed by these products. Three people have died in Kent as a result of taking them, and across the nation they killed 68 people in 2012.

“Trading Standards and the police have been working together to find an appropriate course of action that will get them off the streets.

“They are easy to buy in high street shops, they’re very dangerous and we want to stop them being supplied in Kent. We have had many messages from the public urging us to see what we can do.”

Kent Police Chief Insp Lee Russell said: “We are taking joint action with our partners at Trading Standards because we believe new psychoactive substances pose serious health risks to anyone who uses them.

“Just because people have been able to buy something legally, does not always mean that it is necessarily safe for human consumption and what worries us greatly is that no one knows precisely what each individual packet contains.

“They haven’t been tested and researched in the normal way a chemical substance for human consumption is and there is very little indication as to what is actually inside them. There is simply no way of knowing whether new psychoactive substances are safe to ingest or to understand what the effect is likely to be on the user. Analysis of some of these products by other police forces has shown they can also contain controlled drugs.

“You take great risks if you ingest any new psychoactive substance, some of which have been linked to a number of deaths in the UK over the last two years. This is why we are taking robust action to support our partner agencies and to help prevent these dangerous substances from being sold in shops throughout Kent.”