A total of 21 premises were visited, resulting in more than 6,000 packets of cigarettes and rolling tobacco being seized, together with £4,000 cash, and eight shops were forced to close because of issues relating to staff working illegally or without leave to stay in the UK. 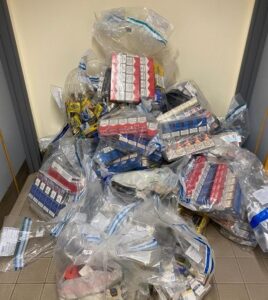 Premises across Thanet were targeted on the first day of the operation, (Friday, 19 March) and despite action being taken, more goods were seized when shops were revisited the following Monday and Tuesday.

The sequence of visits was as follows:

Clive Phillips, Operations Manager for KCC Trading Standards, said: “We will continue to work with our enforcement partners in clamping down on the sale of illicit tobacco.

“Illegal tobacco brings organised crime into our communities while making smoking more affordable for those attempting to quit and making it more accessible to young people. Shops selling illegal tobacco can be reported anonymously through 0300 999 6 999 or by visiting www.stop-illegal-tobacco.co.uk .”