A Dartford shopkeeper has been given a suspended prison term for selling illegal and counterfeit tobacco.

KCC Trading Standards prosecuted Anwari for three offences of possessing for supply tobacco product which did not have the correct health warning labelling and four offences relating to counterfeit cigarettes. Anwari had appeared at Medway Magistrates’ Court on 15 October 2018 and pleaded guilty to all charges. He was committed to Crown Court for sentence. 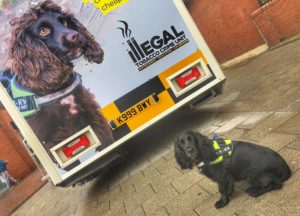 Judge Martin Huseyin heard that on two occasions KCC Trading Standards officers visited the shop as part of an illegal tobacco operation with the assistance of a sniffer dog and handler.  On both occasions the dog indicated the presence of concealed tobacco which was suspect of being counterfeit and was seized.

A test purchase was also arranged, and a volunteer purchased 20 Marlboro Gold for £5 which the health warning was in a foreign language. This packet was suspected as being counterfeit and was seized.

In total 813 packets of cigarettes and 1.9kg of hand rolling tobacco were seized. Samples of the seized cigarettes were confirmed to be counterfeit following analysis by the relevant trade mark holders.

The judge commented on the degree of persistence of the defendant in allowing illicit tobacco to be sold in East Hill Groceries despite visits from Trading Standards officers over several months. In handing down sentence, he considered the amount of tobacco, aggravated by a previous conviction in 2015 for similar offences in Worthing Magistrate’s Court, crossed the custody threshold.

Anwari was sentenced to a total of six months’ prison, suspended for a period of two years, and 240 hours of unpaid work for the community.

Steve Rock, KCC’s Head of Trading Standards, said: “We take the sale of illegal cigarettes and tobacco very seriously. We hope this latest successful prosecution will act as a warning to other traders selling counterfeit goods in our county that we will do everything in our power to protect the safety and rights of the residents of Kent.”