It was a double win for KCC’s road safety team at the FirstCar Young Driver Road Safety Awards.

The awards recognise the efforts of road safety professionals to reduce casualties among young drivers.

Speak Out was named the winner in two of the five categories at the 2018 awards ceremony for Best New Scheme and Best Young Driver Media Campaign.

In 2017 Kent County Council’s road safety team launched the Speak Out campaign, aimed at giving young people the confidence to voice their concerns.

Research shows that many 16 to 24-year-olds in the passenger seat would rather keep quiet and not tell the driver to be careful, even when they feel unsafe or uncomfortable by the way they are being driven.

The initiative was described by the judges as ‘truly outstanding’ and ‘the stand-out entry’, with ‘the right mix of research, behavioural change techniques and a clear focus on their target market’.

Road safety officer at Kent County Council Philippa Janaway said: “Our research shows many 16 to 24-year-old passengers would rather keep quiet than tell a driver they are concerned about their behaviour.

The campaign highlighted the serious implications and risks of not speaking out.

It raised awareness about driver fatigue, mobile phone usage, how music can affect moods of drivers and how young drivers are easily distracted by their passengers.

The campaigns objectives were exceeded with 75% of young people suggesting they would say something if concerned by a driver’s behaviour; 83% could recall at least one coping strategy and 77% of drivers positively changed their behaviour or had their behaviour positively reinforced. 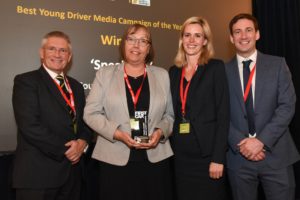