Reaction times when using a mobile phone whilst driving are slower than being at the drink drive limit or whilst smoking cannabis.

The research has been revealed as Kent County Council launches a month-long campaign to encourage people to ditch their mobiles whilst driving.

A survey by KCC found 73% of people fear the biggest risk to them on the roads is drivers using their phones whilst at the wheel.

The awareness campaign aims to remind drivers that phones cause a huge distraction and that it is a myth to think that it is possible to concentrate fully on two things at once.

Road Safety Team Leader at KCC Vicky Harvey said: “The reality is that no two activities can be given equal attention – one task will always be more dominant.

“It’s not simply splitting your attention 50:50, it’s more like 95:5 with the task seeming the most important taking over – with drivers using a phone that means the call or text completely takes over from the driving.

“With a task as important as driving, even just a slip in concentration due to a mobile phone could lead to severe consequences.

“It impairs reaction time, reduces concentration levels, leads to poorer judgment of speed and distance and reduces your field of vision.”

“Drivers using mobile phones make the roads less safe for us all.” 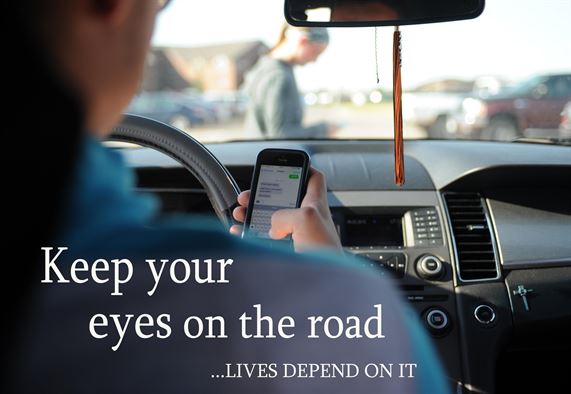 The campaign will highlight key moments in everyday life where it would be perceived as ludicrous to answer a mobile phone and in doing so, emphasise that driving is one of these moments.

The campaign will be running throughout July and will be heard on Heart Radio, KMFM, Spotify and across social media as well as being seen on bus backs, petrol pumps and digital screens across the County.

Drivers are also being told not to be fooled into thinking hands-free calls are legal or ‘safe’.

KCC’s research gives strong backing to the continuing need to raise drivers’ awareness of the increased risk they place themselves in when using a mobile phone at the wheel and to remind them that Kent Police are actively looking for them.

Chief Inspector Peter Steenhuis from Kent Police’s Roads Policing Unit said: “Using a mobile phone at the wheel is very distracting and forms one of the fatal four driving offences; drink drug drive, not wearing a seat belt, excessive speed and driving while distracted. In many cases distracted driving is the cause of serious accidents which could have otherwise been prevented.

“Too many people continue to use their phone illegally when they drive and it is these people we need to target. The safety of the public using the roads either as other drivers, passengers or pedestrians is far more important than any phone call or text.”