One drink will affect your ability to drive.

In the last three years there have been 666 crashes on Kent’s roads where a driver was above the legal alcohol limit, resulting in more than 1,000 people being injured – 19 fatally.

Drink driving is a needless killer on Kent’s roads.

This summer’s campaign highlights the consequences of drinking and driving.

It can lead to a driving ban and a prison sentence, with consequences beyond that from fines, points on your licence and increased insurance premiums, to losing your job

One drink will affect your ability to drive safely as small amounts of alcohol affect drivers’ reaction times, judgement and coordination. 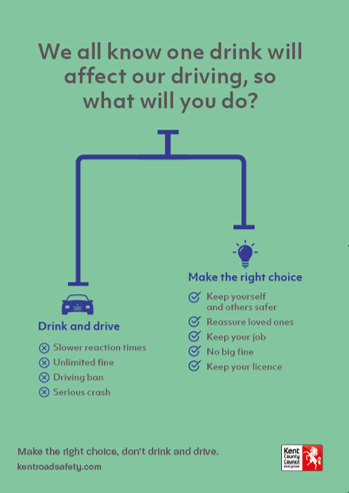 “A drink driver can cause a serious crash and change yours and someone else’s life forever.

“Just one drink can increase the chances of having a crash, sometimes with tragic consequences.

“Act responsibly this summer and please do not drink and drive. It’s not just those above the limit that are at risk as you don’t have to be drunk to be dangerous; so is one drink worth the risk.”

Drink drivers don’t just injure themselves; a collision last year caused by a drink driver resulted in nine casualties and over the last three years 341 more people were injured than the number of crashes because of drink driving.

Three-quarters of those found to be over the limit were male, with most aged between 25 and 40. Over half of crashes happen on roads with a 30mph speed limit, the places where vulnerable road users are mostly found.

KCC cabinet member for highways Mike Whiting said: “Alcohol makes it impossible for drivers to assess their mental and physical states because it creates a false sense of confidence and means drivers are more likely to take risks.

“This campaign is asking people to make the right choice and not drink and drive – you might think after a pint you are in control, but you are not.

In support of this campaign, Kent Fire and Rescue Service (KFRS) will be promoting positive behaviours around driving sober at events across the county including fire station family open days, the Kent Show and Kent Police open days.

Drivers will be encouraged to take part in an online driving skills challenge around driving sober.

KFRS Area Manager for Prevention and Protection Colin King said: “It’s against the law to drive under the influence of alcohol, illegal drugs, or even if you have other drugs above a specified level in your blood.

“Driving in any of these conditions is a bad idea – not just for the driver but for their passengers, other road users and pedestrians.

Kent Police’s Roads Policing Unit Sgt Mark Carron said: “When the summer comes around, we understand that everyone wants to go out and enjoy themselves, but we ask people to do so responsibly and to make arrangements to get home safely.

“Drivers who drink alcohol before getting behind the wheel are not only risking their own life, but the lives of their passengers as well as other innocent motorists or pedestrians.

“As always our message remains the same – there is no excuse for driving under the influence.”

Medway Council’s Portfolio Holder for Frontline Services Cllr Phil Filmer said: “There is simply no excuse for drink driving. Just one drink can have a devastating impact on a number of people’s lives, not just the drivers.

“We all have a responsibility to reduce the number of incidents on our roads and one drink is not worth the risk.” 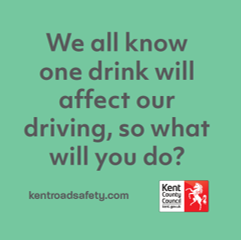 At the KFRS events visitors will get the chance to test their response times wearing goggles that simulate the effects of alcohol and drugs as they’re challenged by the Batak response simulator game.

The KFRS Road Safety team will also be encouraging people to sign up to the KFRS Road Safety Pledge to keep our roads safe. As part of the pledge, each person that signs up will get a car sticker to display – if it’s spotted in their car in the monthly sticker spotter competition, they will win a shopping voucher.

Colin King (KFRS) added: “We hope by encouraging people to sign up to the Road Safe Pledge and take part in our online driving skills challenges it will remind people of the associated risks of driving.

“The aim of the pledge is to reduce road crashes and prevent unnecessary injuries or even death.”