The Vice Chair, Members and Officers of Kent County Council (KCC) have taken part in a quiet act of remembrance to honour the Queen and give thanks for her life.

The short ceremony took place in the Stone Hall at Sessions House.

The first wreath was laid by the Vice Chair of the Council, Gary Cooke, who said:“From a personal point of view, I was born as Queen Elizabeth II ascended the throne, so she has been Queen for my entire life.

“There is such tremendous love for Her Majesty, and it is so important to come together and to show a genuine and heartfelt mark of respect in this way. Nobody deserves it more than our Queen.”

The laying of the Vice Chair’s wreath was followed by the Leader of Kent County on behalf of the Cabinet and Members of the authority. Roger Gough said “It was really important for Members, officers and staff to be able to commemorate the Queen in this way. 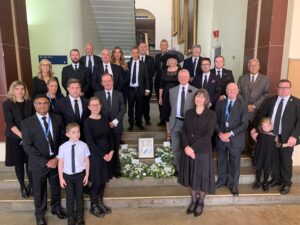 “There is a vast amount going on across the county and across the world, but this was our own quiet moment. We are all of us, in our humble way, public servants, and Queen Elizabeth was, I think, the greatest public servant in the country.

“I think it is entirely right that we, for ourselves, find that moment to reflect, to commemorate and to recognise all that The Queen has done for the country and for Kent.”

Laying a wreath on behalf of the Opposition, Leader of the Labour Group, Dr Lauren Sullivan, said: “It’s so important to come together as a Council to recognise and truly reflect on the great service that the Queen has delivered throughout her entire life. She is an inspiration to us all. May she rest in peace.”

Officers of the Council’s Corporate Management Team then stepped forward to pay tribute on behalf of all KCC staff, before the group left County Hall to make their way to the Proclamation of King Charles III at the Town Hall in Maidstone, the County Town of Kent. 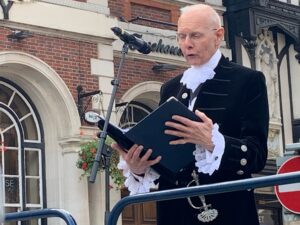 The Union Flag at County Hall was raised to full mast yesterday (Saturday 10 September) when the new sovereign King Charles III was proclaimed in a historic service at St James’s Palace. It remained at full mast until Sunday afternoon when it was once again lowered to half-mast, where it will remain until the day after Her Majesty’s funeral.

The date of the funeral has now been confirmed as 11.00 am on Monday 19th September, which has also been declared a Bank Holiday.

Anyone who would like to pay tribute to Her Majesty the Queen is warmly welcome at County Hall where a Book of Condolence is available to sign between 9am and 5pm every day, including over the weekend.