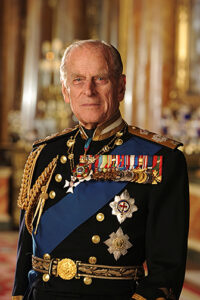 His Royal Highness the Duke of Edinburgh

The Chairman said: “The Duke has been a constant source of support for Her Majesty The Queen during her reign and he has brought much to the UK and the commonwealth.

“His ease and good nature with the public when visiting the county, and indeed the many other parts of the UK and the world, will be remembered by many, as will his good humour and love of sports.

“Many young people have benefitted from The Duke of Edinburgh Awards programme, which offers many young people across the world the opportunity to gain the skills and experience to help them build confidence and resilience for their future.

“We pay tribute to The Duke for his unwavering support and service to the United Kingdom and our thoughts and prayers are with Her Majesty and the Royal Family at this most difficult of times.”

From today, a period of national mourning began and will continue for eight days until the morning of the funeral.

During that time, the government will issue guidance for the public, organisations and businesses for observing the period of mourning.

You can leave your tributes to His Royal Highness The Duke of Edinburgh by signing the book of condolence on the website of The Royal Household.

If you are unable to access the online book of condolence you are welcome to send your tribute in writing to: Tribute to HRH The Duke of Edinburgh, The Civic Office, Sessions House, County Road, Maidstone ME14 1XQ.

Please include your address and a telephone number if you are sending a written tribute for us to add to the online book of condolence.

The Royal Household has requested that members of the public do not leave floral tributes or gather in public places to offer their respects. The palace has suggested that people could donate to charity instead, if they wish to do so.

The Lord-Lieutenant of Kent, The Lady Colgrain, has expressed the profound sympathy of the people of the county on the sad death of His Royal Highness The Duke of Edinburgh.

In paying tribute to The Duke, The Lady Colgrain said: “His Royal Highness has been a loyal and devoted consort and a source of great strength to Her Majesty The Queen throughout their lifetime together.

“The Duke has contributed so much to this nation and the Commonwealth and accompanied The Queen on all of her official overseas visits.

“We remember his many visits to the county, both on his own and at Her Majesty’s side, chatting to the public and displaying an infectious sense of humour.

“Many will remember him for The Duke of Edinburgh Awards which he founded in 1956.

“This hugely successful scheme has proved to be life-enhancing for generations of young people across the UK and globally.

“Many of Kent and Medway’s young people have benefitted from this scheme and discovered a whole new world of adventure and self-belief that might not have been available to them before.

“His passion for science, engineering, sport, conservation and the environment saw him take on roles as Patron or President with over 750 organisations.

“But it will be for the steadfast support that The Duke has given to Her Majesty throughout her reign that we will all reflect on and his lifetime of dedication and wise counsel’.

“We will always be grateful for all that he has done for this nation, the Commonwealth and our county.  Our hearts go out to Her Majesty and all Members of the Royal Family at such a sad time.”

The Chairman of Kent County Council expresses sympathy to her Majesty The Queen on the sad loss of His Royal Highness the Duke of Edinburgh was last modified: April 12th, 2021 by Thom Morris