Scientific analysis of a number of CBD (Cannabidiol) products – an increasingly popular remedy for pain relief – has found that the majority of those tested contained illegal drugs.

At the same time, several products were found to contain hardly any CBD element at all. 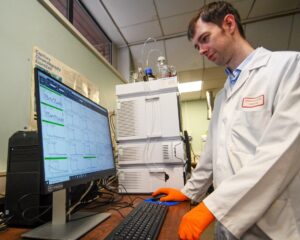 A senior scientific officer at Kent Scientific Services at work on the testing equipment.

Testing has been carried out on behalf of several local authorities by Kent Scientific Services, the Official Control Laboratory operated by Kent County Council.

CBD is classed as a novel food and is currently being assessed for safety by the Food Standards Agency. The FSA has allowed about 6,000 products to be marketed in the UK, pending final approval. If the product is on the list, it can be sold; if it is not on the list, it cannot.

KSS Public Analyst Jon Griffin who led the testing said: “CBD is the non-psychoactive element of cannabis. It is suggested it can have benefits including reduced anxiety, assisting with sleep and managing pain. On its own CBD is not an illegal controlled drug.”

The results of testing on the first 61 products for various interested bodies including Kent’s own Trading Standards service have shown that:

So, in total, of the 61 samples, 72% contain one or more of these psychoactive elements of cannabis.

Mark Rolfe, the Head of KSS, said: “The issue with this, in my view, is that people don’t know what they are consuming. We have tested one sample for a member of the public who has failed a workplace drugs test having, he says, never touched drugs in his life. He has, however, consumed this product which we have found to contain the drug for which he failed the test.” 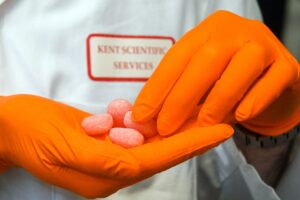 Cola chunks – one of the products which had illegal ingredients

Examples of the products are:

The result of the analysis of each product is sent to the agency or service which commissioned it from KSS for them to determine what action to take.