A countywide competition in which children were invited to write about their chosen heroes has culminated in a glittering awards ceremony.

The Kent Big Writing Challenge was organised and promoted by KCC’s Reconnect programme in conjunction with the KM Charity Team. 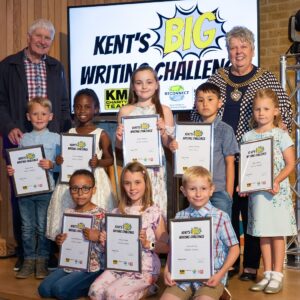 Award-winning children’s author Nick Butterworth, the man behind the Percy the Park Keeper books, was among the guests attending the awards event at the Canterbury Cathedral Lodge where winners received a framed certificate and a commemorative book. The overall champions were presented with a specially designed glass trophy.

The competition was open to children and young people who live or go to school in Kent and was divided into three different age categories: key stage 1 (years one and two primary), key stage 2 (years three-six, primary) and key stages 3 and 4 (years seven to 11, secondary).

KCC’s Cabinet Member for Education and Skills, Shellina Prendergast, said: “I wanted as many Kent children as possible take up this challenge and I was delighted by the response and bv the quality of so many entries.

“The competition was aimed at encouraging a positive relationship with literacy and is the chance to demonstrate children’s creativity, and I am sure it has achieved those aims. 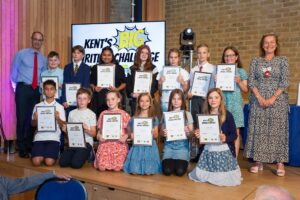 “I hope this will become an annual creative writing competition for children and young people.”

KM Charity Team CEO Mike Ward said: “This was the first time we have delivered Kent’s Big Writing Challenge and we are very grateful for the support of the KCC Reconnect Programme for funding it.

“The hardest part was choosing the winners. The best part was the sheer diversity of who our young people see as heroes. There were lots of mums and dads, key workers – including a Tesco security guard who made one of our winners smile. 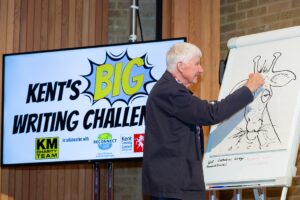 Author and illustrator Nick Butterworth in a creative mood

“We really hope to deliver this again next year and so are working hard to secure sponsorship as the outcomes have been so important to so many children and young people.”

The Reconnect programme funded the competition while the KM Charity Team managed the logistics including creating the webpage and submission portal, sorting the judging panel and process and organising the awards event.

KCC’s Reconnect programme was created in April 2021 to try to reconnect children and young people with activities and opportunities they had missed during the Covid-19 pandemic.