A new national campaign is encouraging people to report child abuse if they are worried, or concerned that a child has or is likely to suffer harm, neglect or abuse.

One third of people, who suspect child abuse, do nothing.

Understandably most people find the decision to report child abuse a difficult one.

They worry about overreacting or being wrong, and may question whether they have strong enough evidence, or if they have misread the signs of abuse or misunderstood a situation.

These fears are understandable, but unfounded. 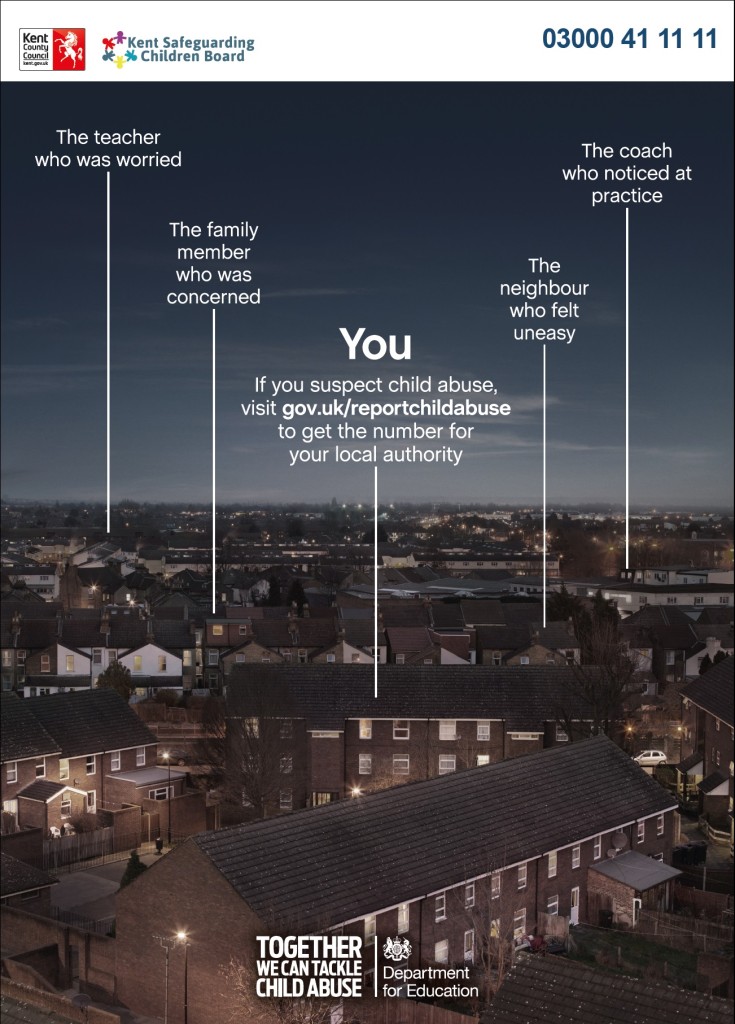 Don’t assume that someone else will take responsibility. You could help to save someone’s life. If you are worried, report it.

One of the biggest barriers to reporting child abuse is that people fear being wrong and the consequences of that – potentially breaking up a family.

However, the reality is that information is usually gathered from many sources, and often any report made by a member of the public would form one part of a bigger picture.

A small piece of information could be the missing piece needed, so it is very important.

Another big worry people have is that someone will find out they have made a report, but this is unlikely to happen as calls can be made anonymously, although most people do give their details.

Peter Oakford, Kent County Council Cabinet Member for Specialist Children’s Services said: “Here in Kent we want to support this national campaign and encourage more people to report concerns they may have about a child.

“Some people don’t report suspected abuse because they think it might just be a one-off. But even if that is the case, every child deserves to be protected and it is better to be safe than sorry.

“You don’t have to be absolutely certain about whether a child is being abused; if you have a feeling that something’s not right, talk to our children’s social care team who can look into it.”

Everyone has a role to play in helping to protect children. All children have a right to be safe and should be protected from all forms of abuse and neglect.

It is not just up to social services, doctors and the police to spot the signs of abuse and neglect. Members of the public are in a unique position to spot concerns among children with whom they have contact – which may not be apparent to professionals.

It is better to help children as early as possible so that action can be taken to help the child and support the family concerned.

Many people believe that physical or sexual violence are the only forms of child abuse but this is not the case. In 2014-15, over three quarters of the children on child protection plans in the UK were as a result of neglect or emotional abuse.

Of the remaining children, 10% for physical abuse, and 5% for sexual abuse. Many children and young people are likely to experience more than one type of abuse.

Neglect covers the ongoing persistent failure to meet a child’s basic needs. It may include failing to provide adequate food, shelter, clothing, or medical treatment. Neglect includes failure to protect a child from harm or danger and failing to ensure proper care or supervision.

To spot the signs of child abuse or neglect, look for changes in:

If you’re worried a child is being abused or neglected, sharing your concerns with Kent County Council’s children’s social care team could mean the authorities spot the problem sooner and action can be taken to help the child and support the family concerned.

In 2014/15 more than 400,000 children in England were supported because someone noticed they needed help and in Kent 16,629 referrals to children’s social services were made.

If you suspect child abuse or neglect in Kent, visit: www.kent.gov.uk/reportabuse, email socialservices@kent.gov.uk or call 03000 41 11 11.