A suicide prevention conference has been held as part of Mental Health Awareness Week, bringing together organisations from across Kent including local authorities, health providers, emergency services, community groups, charities and the private sector.

Led by the Kent and Medway Sustainability and Transformation Partnership (STP) of which KCC is a partner, the ‘Release the Pressure’ audience of 230 guests heard from a range of speakers and case studies.

Among those presenting were local community groups and projects which have been awarded grants from Government funding totalling approximately £100,000, to support innovative programmes designed to prevent suicide and reduce self-harm.

The projects include a walking group, drop-in support services, buddy schemes, a documentary style film exploring why men are at high risk of suicide, and a new song called ‘Living Words’ which was based on the experiences of people from Folkestone who have made suicide attempts.

There was also an announcement about new suicide prevention e-learning courses available across Kent and Medway which are designed to give people a basic understanding of suicide prevention issues and to increase knowledge and confidence about the role we can all play in keeping others safe. This training is available free via the Kent Safeguarding Children’s Board website www.kscb.org.uk

The funding is overseen by the Kent and Medway Suicide Prevention Steering Group which produced the 2015-20 suicide prevention strategy and action plan, following national priorities to reduce the risk of suicide in key high-risk groups and tailor approaches to improve mental health and wellbeing in the county.

The Release the Pressure campaign urges people to seek help by calling Freephone 0800 107 0160 where support is available from trained and experienced staff 24 hours a day, 365 days a year. The campaign website www.releasethepressure.uk also includes case studies from men in Kent who have turned their lives around after attempting suicide. 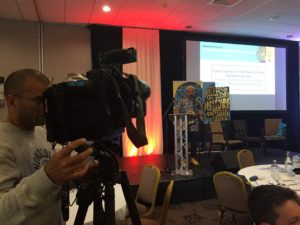 See the tweets below for a flavour of what happened.