Construction work on the new £10 million community hub in Southborough has been completed and the building has officially been handed over by the contractor. 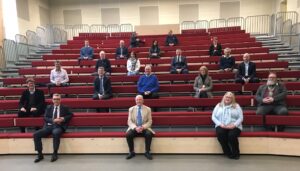 Guests at the handover, seated in the new theatre auditorium

The fitting out of the main building – under the new name of the Southborough Civic Centre, adopted by the town council on 8 March – will begin imminently. The completion of the hall/theatre, community rooms, GP surgery, library and retail unit on the site of the former town council offices and the Royal Victoria Hall in London Road is expected to take about seven weeks.

The project has been mostly funded with contributions from Southborough Town Council, Kent County Council and Tunbridge Wells Borough Council.

Representatives of all three councils, together with other interested parties and Tunbridge Wells MP Greg Clark, were shown around the building on Friday (26th) by staff from the main contractor, Paddock-Wood based Baxalls Construction. 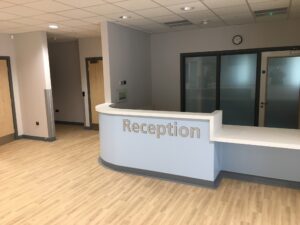 Mr Clark said: “I congratulate everyone involved in bringing this impressive project to fruition. Having worked with Kent County Council, Tunbridge Wells Borough Council, Southborough Town Council and community groups to get the funding in place, I have been eagerly following the progress of the building.

“It was a pleasure to finally take a look inside. The local contractors, Baxalls, have done a wonderful job. It is a superb facility and I am sure the residents of Southborough will be as impressed as I am when they are able to come and use it.”

Working closely with the NHS, the project also secured a significant grant of £4.2m towards a new GP surgery catering for patients in Southborough and High Brooms. 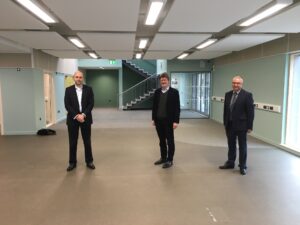 The hub project was also awarded a grant of £500,000 from the Football Foundation towards the construction of a new pavilion and Tunbridge Wells Youth Football Club has been granted a long lease on the premises.

Representatives of all the major parties involved gathered at the site in October 2019 to mark the official start of the project. Despite two breaks in the construction work due to the pandemic, Baxalls managed to complete it and hand over the building only a few weeks later than anticipated.

Another local firm appointed by the project board was HMY, award-winning architects based in Tunbridge Wells, one of whose partners lives in Southborough.

An official opening event is planned for July.