• Investment could unlock massive growth, more than doubling the South East’s economy and supporting half a million new jobs by 2050
• Strategy sets out “bold and compelling” future that is better for people, better for business and better for the planet
• Prioritising greater investment in public transport is the only feasible way to reduce congestion, cut emissions and boost air quality in the long term

An ambitious plan to more than double the South East’s economy by 2050, create half a million new jobs, reduce congestion, cut carbon emissions and boost air quality has been published today – and people across the South East can have their say.

The strategy says that with the right investment in our region’s transport network the South East’s economy will more than double over the next thirty years – from £183bn to between £450bn and £500bn per year – creating an additional 500,000 jobs, boosting quality of life and access to opportunities and helping cut the South East’s carbon emissions to net-zero.

The strategy sets out a thirty-year framework to guide decisions about where, when and how money is invested in the South East’s transport network, along with a range of policy changes and other initiatives to make sustainable travel easier and more attractive to people and businesses. These include arguing for a real-terms freeze on rail fares, cheaper off-peak fares and extra funding to protect and enhance rural bus services.

Reducing the region’s reliance on private cars – which account for 70% of all journeys compared to just 4% by rail and 5% by bus – is vitally important as the strategy is clear that catering for forecast road traffic growth in the South East is no longer sustainable in the long term. It will also help cut carbon emissions and improve air quality as private cars contribute more to UK greenhouse gas emissions than any other form of transport.

For the next 12 weeks, people and organisations across the South East will be able to have their say on the draft transport strategy online. A launch event takes place today in Farnborough with transport minister George Freeman MP. A series of ‘roadshow’ events are taking place across the South East from 16-24 October for people to find out more. 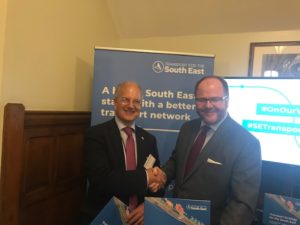 Michael Payne, Kent’s representative on TfSE since the shadow board was first launched in 2017, said: “Our region has an economic output greater than Scotland, Northern Ireland and Wales combined and second only to that of London.

“Yet everyone has heard of Transport for London but investment in transportation infrastructure in our region has been woefully inadequate by comparison.

“TfSE’s draft Transport Strategy has a thirty year vision to support clean growth and the potential doubling of the economy for our region.”

Transport minister George Freeman MP said: “Improving the UK’s transport network is a priority for the government. The Prime Minister has created this new role of Minister of State for the Future of Transport to turbo UK leadership in tackling disconnection, encouraging decarbonisation and promoting digitalisation which is key to unlocking economic growth, boosting employment and improving air quality.

“Right across the country, we are considering innovative new ways to connect passengers, freight and businesses both within the UK and abroad through a truly integrated transport network.

“I welcome TfSE’s 30-year vision for transport in the South East and today’s launch signifies a new and exciting chapter in the region’s history.”

Cllr Keith Glazier, chair of Transport for the South East, said: “Balancing the needs of the economy and the environment is the single biggest challenge we face. But, if we get it right, the prize is huge.

“Our strategy sets out a future for the South East that is better for people, better for business and better for the planet. We’ll more than double the South East’s economy, creating an additional 500,000 jobs, boosting quality of life and access to opportunities for everyone and cutting the region’s carbon emissions to net-zero.

“To make this happen, we need to work together as one region. That’s why we want as many people as possible to take part in our consultation, to have their say on our proposals and help shape the South East’s future.”

Margaret Paren, Transport for the South East board member representing South East Protected Landscapes, said: “The South East is home to some of our nation’s most important and under-pressure protected landscapes. We welcome the transport strategy for the South East’s ambitions for environmental sustainability and greater and more accessible public transport. We urge people to feed into this important consultation.”

Ross McNally, director at Enterprise M3 Local Economic Partnership (LEP) and Transport for the South East board member representing LEPs, said: “The South East is a fantastic place to live, work and do business and we need to ensure our transport system continues to allow industry to thrive.

“LEPs across the South East have supported TfSE from its inception, highlighting the unique set of challenges in our region and the opportunities that exist to deliver a nationally and internationally significant transport system.

“The launch of the draft transport strategy is an important milestone towards building a better, more sustainable transport network for the whole of the South East business community.”

The draft transport strategy identifies priorities for future investment by looking at the challenges people and businesses will face in moving around the region and the opportunities these present to support sustainable economic growth.

These include a range specific schemes as well as wider policies and initiatives. For example, the strategy argues for greater use of new and emerging technology such as connected autonomous vehicles (CAVs) to boost connectivity. It makes the case for policy changes to enable more joined up planning, particularly between transport and housing, to help reduce the need to travel and build more sustainable communities. And the strategy also recognises that tough decisions will need to be made about how, not if, we manage demand on the busiest parts of our transport networks.

Have your say
To read the draft transport strategy and take part in the consultation, head to http://tfse.org.uk/transport-strategy.

The deadline for responses is Friday, 10 January 2020.

Find out more at drop-in ‘roadshow’
A series of ‘drop in’ events are taking place around the South East in October for people to find out more about the strategy. All events run from 4.30pm-6pm and all are welcome.

Next steps
Following the public consultation, a final version of the transport strategy will be put to Transport for the South East’s board in spring 2020. A strategic investment plan is planned for publication in 2021, providing a prioritised, costed and deliverable list of schemes, initiatives and policies to start turning the South East’s vision into reality.