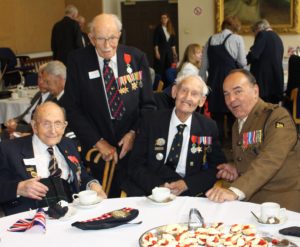 The start of the country’s D-Day commemorations were marked at County Hall on Wednesday (5 June) when KCC Chairman Ann Allen hosted a tea party for about a dozen service veterans.

Proudly displaying their various medals, the veterans, accompanied by a few relatives and carers and several current representatives of the Armed Forces, enjoyed a chat and a wartime sing-song as well as tea and cake.

This was led by professional singer Miss Holiday Swing, who led the party through well-known songs including “The White Cliffs of Dover”, “Boogie Woogie Bugle Boy” and “I’ll Be Seeing You”. 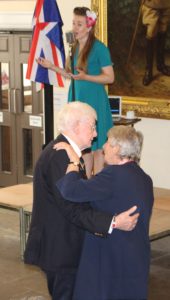 Miss Holiday Swing provides the music as KCC Chairman Ann Allen takes to the dance floor with one of the veterans.

veterans, who came from across the county, included three who took part in the D-Day Normandy landings – 103-year-old Leslie Gosling, from Marshside near Herne Bay, Theo Dalgliesh, from Upstreet and Frank Gibbins, from Cliftonville.

They are the only three remaining members of the Canterbury Veterans Association.

Mrs Allen said: “It was a privilege to host this event, which was just a small gesture to express our thanks to some of the thousands of servicemen and women who fought for us in the Second World War.

“It was particularly apt that we were able to organise it to coincide with the start of the D-Day commemorations.

“They do not get the opportunity to share their wartime memories very often and I am delighted that they all seemed to enjoy the party.” 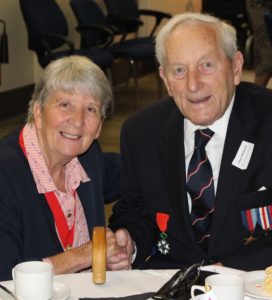