A schoolgirl from Tonbridge who wrote to Kent County Council to ask for help with protecting the environment has begun her fight against litterbugs.

So dismayed by the rubbish she sees on the ground, Charlotte Flower, nine, penned a letter to KCC’s waste department to ask for some “litter picker uppers” to help her and her friends keep their school grounds clean.

In the note, the Sussex Road Primary School, Tonbridge, pupil said: “I’m quite serious about the environment and want to start a litter picking club at my school.

“I’d really appreciate it as I think helping the environment is something everyone should know.” 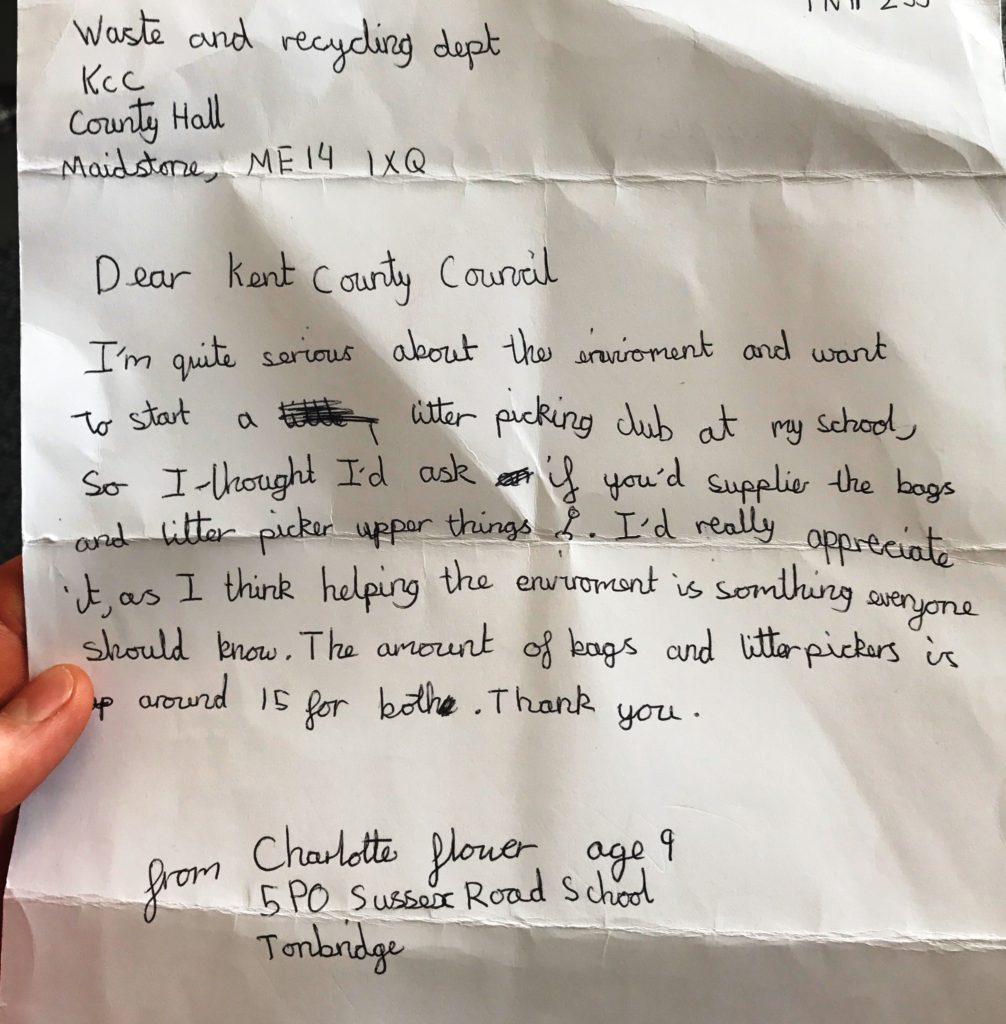 Joining in with the surprise were Charlotte’s mum Kelly and her nan Vivienne, who had travelled down from London.

Nichola and Tamsin, armed with 15 litter pickers, a box of black sacks, mini hi-viz jackets and 15 rubbish bag hoops, handed them over to a speechless Charlotte and her sister Clara, eight. 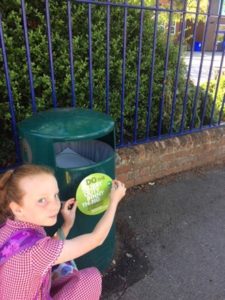 Charlotte said: “I swear you could have fitted a gobstopper in my mouth – it fell right open.

“I thought the council had forgotten me so I got really excited and I was shocked – it blew my mind,

“The next day I went and put up my bin stickers and I am now planning on doing the litter picking club with my headmistress.”

Nichola said: “When we received Charlotte’s letter we were so chuffed to see how passionate she was about the environment.

“We need more people like Charlotte and her sister and we were only too happy to provide her with some litter pickers.

“We didn’t let on that we were going to turn up so she was called to the playground and we presented her with her goodies.

“Now she can start her club around the school. We’re going to keep in touch with her and we look forward to hearing how she gets on.

“We are committed to following Charlotte’s progress and how much influence one child can have on their community. We’ll be checking back in with Charlotte later on in the year to see how much waste her and her litter picking team have collected in an effort to clean up Kent’s streets.”

Tonbridge and Malling Borough Council’s Tamsin said: “We are very impressed with Charlotte’s dedication to keeping her school clean and tidy – she is doing a fantastic job of helping to raise awareness of how we can all Love Where We Live by disposing of our litter responsibly.” 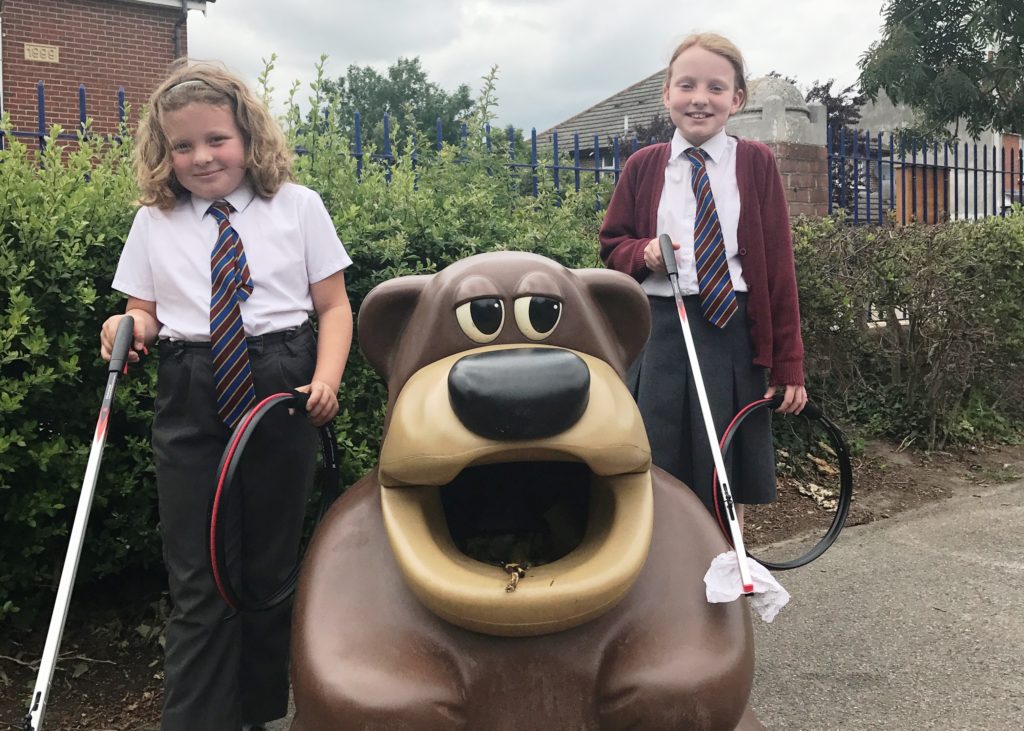 Charlotte, who wrote the letter as part of a homework challenge, said: “I’ve seen lots of litter around the school and I’m unhappy about it. It hurts the environment and I think it’s selfish – it’s hurting people’s lives.

As part of KCC’s Keep Kent Clean campaign earlier this year, the authority collected a whopping 2,106 bags of rubbish during the campaign – 870 of those from the highways.

Charlotte, whose other passion is women’s rights, is rubbing off on her younger sister Clara too.

Clara said: “I put a poster up on a grit bin near our house as these boys came up and brought loads of litter with them.

“It said no littering and had lots of drawings saying you should put your litter in the bin.”

Mum Kelly also has to muck in whenever litter is spotted on the ground.

She said: “Whenever she sees litter she never likes it. She frequently tuts at people for dropping litter. She’s always picking it up or making me pick it up.” 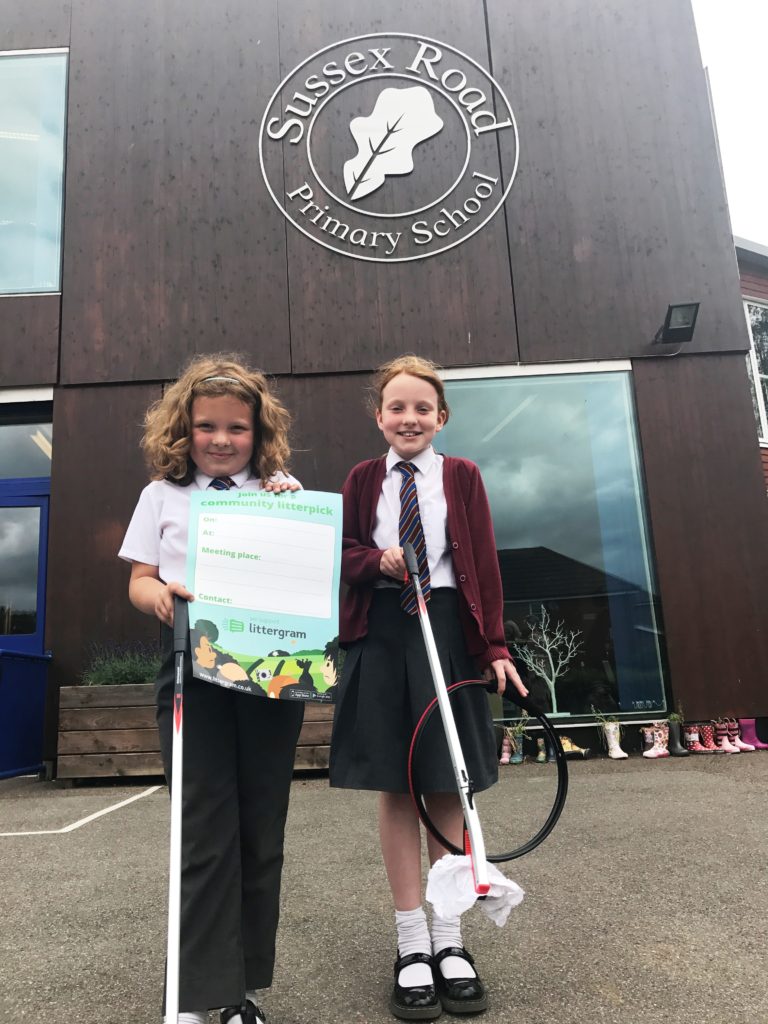