Kent County Council’s (KCC) inclusive disco for adults with learning disabilities pulled out all the stops for its Christmas ball in Ashford.

For the last 14-years, Saturn Nightclub has been the place to be for disabled adults, their friends and carers to make new friends and party the night away with resident DJ Phil Lambkin.

The latest of the monthly club nights at Ashford United Football Club on Friday, December 14 saw more than 70 service users don their glad rags and enjoy a festive buffet before hitting the dance floor.

Among them was Rhys Ali. Mr Ali, who is 23 and from Ashford, said: “The best thing about Saturn Nightclub is being able to spend time with my friends and dance with my girlfriend, I really love the music.” 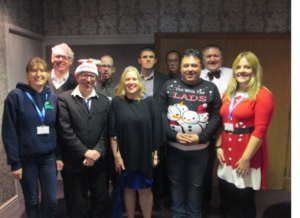 “I have only recently started attending Saturn in the last six months, coming along to Saturn has helped me with my confidence in speaking to new people as well as gaining more independence. I love putting a shirt on and my favourite aftershave ready to go.

“To me, it’s the best nightclub in the world.”

An independent committee of attendees run Saturn Nightclub on a not-for-profit basis. They meet twice a year to discuss the running of the nightclub and make important decisions.

Most events are themed and each year the committee selects a charity they would like to support. This year’s charity is Help for Heroes.

However, with the New Year, the committee would like to see more people join in the fun. They are inviting anyone who might be interested in attending or who knows someone who might be to get in touch.

Sophie Else, a support worker with Ashford Community Services, said: “I can’t overstate the impact an inclusive club night can have on people who might otherwise feel excluded from venues in Kent.

“I love the role of organising Saturn Nightclub, it gives me the opportunity to get to know a lot of people from the community as well as provide an event that adults with learning disabilities can come to on a Friday and dance the night away.

“It’s a great feeling to walk around the nightclub and see everyone dancing and socialising, lots of happy faces!”

Graham Gibbens, Cabinet Member for Adult Social Care and Public Health, added: “As a council, it is our objective empower people with learning disabilities to choose what they want to do, access support and feel equal citizens in their community.

“This includes making sure people with extra needs have a safe and inclusive space they can socialise and enjoy themselves. I would like to thank the staff and volunteers whose hard work makes Saturn Nightclub possible.”

The club is held at Ashford United Football Club in Ashford Road, Kingsnorth between 7pm and 10pm. Admission is £5 and carers and/or family members go free.

Saturn Nightclub will return on the following dates:

For any more information please contact Sophie Else or Amanda James on 03000 420371.