New research by the Kent and Medway Civilian Military Partnership Board shows that ex-service personnel are readjusting well to life after the military.

Acclimatising back to life on ‘civvy street’ can be a struggle for the estimated 129,000 ex-service personnel across the county.

Last year, the Board, which comprises representatives from local government in Kent and Medway, the armed forces, and service charities, sought to find out how well ex-service men and women adapted and whether more help was needed.

Just over 700 people contributed to the research which is available to view online.

There are three regular Army troop bases in Kent – Brompton Barracks, Invicta Park Barracks and Shorncliffe Army Camp – alongside six Reservist bases, and Kent is also home to veterans of all ages who have served in the Army, Navy and RAF.

The research, delivered by Kent County Council’s policy team, was broken down into the following areas:

Health and wellbeing:
• A third of ex-service personnel have a long-term illness or difficulty linked to time in active service
• 21% (of the third) report that they have post-traumatic stress disorder (PTSD)
• Half of these have a physical disability; around a quarter have mental health problems and hearing impairments
• Rehabilitation after injury was a particular issue for reservists and ex-service personnel as the health care they receive is not always of the same bespoke quality as that received by serving personnel and can be too generic to adapt to their specific medical needs and physical attributes

Support within the community:
• Families tend to be close-knit but those without support networks are particularly vulnerable to loneliness and difficulties with transition
• A number of people said they felt abandoned by the armed forces when they left – they lose their friends and their “armed forces family” and struggle to integrate with the civilian community
Schools:
• Problems getting children into the right school were largely resolved, but with considerable effort on the part of the parents
• Syllabus changes when children moved schools were a problem (across the age groups)
• Some parents were concerned by the number of moves their children had to make, had worries about their attainment and stated that some children felt isolated.

Housing:
• 37% of ex-service personnel said it was not at all easy or not very easy to find suitable housing when they left the forces.

Employment and Skills:
• This was quite a positive picture, with those still serving already doing vocational training that is recognised by employers, and those who have left mostly finding employment reasonably quickly.
• There is still more we could be doing to raise awareness amongst employers about the benefits of employing reservists or ex-service personnel, and to facilitate the transfer of skills from the armed services to civilian employment.

Reservists:
• As the proportion of the armed forces that are reservists increases, it is important to ensure their particular issues are addressed – encouraging employers to be supportive; ensuring reservists’ children are well supported in schools, even though they are not eligible for pupil premium; ensuring the health service is responsive to the specific needs of reservists. 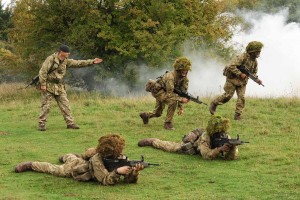 The project is being delivered by Kent County Council’s policy team which is investigating the strengths of and challenges faced by the Armed Forces community.

The Kent and Medway Civilian Military Partnership Board was set up in 2011 to deliver the Armed Forces Community Covenant, which aims to ‘level the playing field’, ensuring that those who have served in the Armed Forces past and present are not disadvantaged in accessing public services in Kent as a result.

Policy and Partnerships Adviser Tim Woolmer said: “This was the third year the Kent and Medway Armed Forces Covenant Conference has been held, this time at the Woodville Halls in Gravesend.

“Its purpose is to promote the Armed Forces Community Covenants, signed across Kent and Medway, focusing on improving access to services for both serving and ex-armed forces personnel.

“Following the conference, it was agreed to develop clear routes for service personnel, veterans and their families to access information and support, building on an award-winning initiative implemented in Sussex.

“An action plan for the forthcoming year is also being drawn up.”