“Release the Pressure” is a new Kent campaign which aims to reduce the number of suicides by encouraging men feeling under pressure to seek help.

In Kent, suicide is the leading killer of men under 45; in 2014, there were 163 registered suicides of which 128 (79%) were men. The rate of suicide in the county is also higher than the national average.* 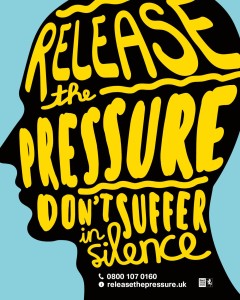 KCC Director of Public Health, Andrew Scott-Clark said: “Life can be incredibly tough – a bereavement or a relationship ending or increasing debt can all cause unbearable pressure in people.

“Given that the majority of these men are not in contact with mental health services before they take their own lives, they are a very difficult group to reach through traditional interventions

He add: “We are encouraging anyone who is feeling the pressure at the moment to talk to someone and we also want to reach out to the friends and family of people that may be going through a rough patch to point them in the direction of crucial support which could prevent them harming themselves.”

The highly visual campaign will be displayed at key sites across the county and will be promoted on social media, urging people to seek help by calling 0800 107 0160 where support is available from trained and experienced staff on this freephone number 24 hours a day 365 days a year.

There is also a website for more details and case studies of men from Kent who have turned their lives around after attempting suicide www.releasethepressure.uk

KCC Cabinet Member of Adult Social Care and Public Health, Graham Gibbens said: “Suicide is a terrible tragedy for the person’s family and the whole community.

“Unfortunately it still accounts for approximately one per cent of all deaths in the county every year and our campaign hopes to get men talking about the problems they are facing rather than suffering in silence.”

Support is free and confidential, provided by an independent charity Mental Health Matters and funded by Kent County Council.

Mental Health Matters Chief Executive Officer Helen Mackay said: “I understand being a man in today’s world can bring many pressures but by reaching out and talking to someone about your feelings, although it may feel daunting at first, can provide a massive release… just by knowing someone is listening.

“Our 24/7 helpline is staffed by experienced counsellors who are there to provide you with a confidential, non-judgemental listening support service. You don’t have to go through this alone. I would encourage anyone is feeling under pressure to make contact.”