A school in Sheerness was among those paid a visit during whistle-stop tour of the county by a government minister.

Rose Street Primary School in Sheerness was suggested as a venue by KCC because of the recent impressive progress made under the current leadership. 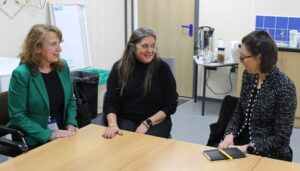 Schools minister Baroness Barran has undertaken a fact-finding mission through a national programme of school visits to help inform the government’s education policy and specifically the forthcoming Schools White Paper.

In particular, she was interested to know why some schools are hesitant to become academies and wanted to hear the views of the only two primary schools on the Isle of Sheppey not part of a multi academy trust. Both Rose Street Primary and West Minster Primary – which make up the Sheerness West Federation – are still maintained by KCC and the Baroness was therefore keen to speak to Anna Pattenden (Executive Head), Sam Mackay (Head of Rose Street Primary) and Hazel Brewer (Head of West Minster Primary).

Also at the meeting was KCC’s Cabinet Member for Education and Skills, Shellina Prendergast, who confirmed the council’s commitment to continuing to raise standards in all schools and its approach to working with headteachers to provide the right balance of challenge and support.

Mrs Prendergast also took the opportunity to raise with the minster the issue of secondary school provision on Sheppey.

The previous day she had answered a question at the full council meeting by pointing out that 55% of secondary school age pupils now travel off the island for their education, despite places being available at Oasis Academy. This compares to 93 per cent of primary age children who attend schools on Sheppey.

She told the council there was a determination to “obtain swift educational improvements on the Isle of Sheppey so that the parents of secondary school age children are confident to apply for a place at their local secondary school.”

Following her meeting with Baroness Barran, Mrs Prendergast said the discussions had been “very positive”.

“We confirmed our determination to raise standards of education on the island and put forward some ideas on how this might be attained,” she said.