Renovation work on a Kent petrol station was so poor and dangerous that it could have caused an explosion, a court was told.

Following an investigation by KCC Trading Standards, the contractor has been sentenced to 200 hours unpaid work and ordered to pay £12,000 in costs at Canterbury Crown Court for breaching health and safety requirements. 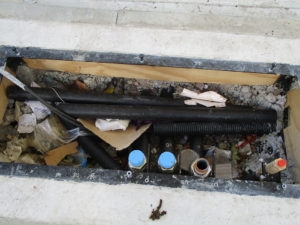 Above and below left: examples of the shoddy workmanship which left the petrol tanks in a dangerous state

The court was told that in early 2016 a shopkeeper took on a former petrol station that was then being used as a car wash business at Westcliff Road, Ramsgate, with the intention of reinstating its former use.

The shopkeeper had not owned or run a petrol station before so to bring the six-tank site back into use as a petrol station he needed someone with expertise to help him and engaged the specialist services of DJ Forecourts Ltd, based in Hartlepool. Its sole director, Darren Seal described himself as an “engineer who works on petrol stations”.

The company claimed that its staff were up to date with all current safety procedures and practices with regular ongoing training.

Darren Seal quoted £62,500 to carry out the refurbishment which included removing the foam from the tanks; cleaning and lining them; channelling and concreting the forecourt; and running the cabling and duct work up to the shop.  Seal confirmed the work would be up to current standards.

Work began on the site in June 2016 although there were no permissions in place. Weeks later when the renovation came to the attention of the Petroleum Licensing Authority, KCC Trading Standards officers visited the site and because of the obvious poor quality of work they insisted on a full site inspection before a petroleum storage licence would be issued.

An industry expert conducted an examination inside the tanks. Upon opening the lid of one tank there was a fast food wrapper inside the tank which, in his view, would not have been there had the work been completed and inspected properly. The tank itself had not been relined to an acceptable standard. 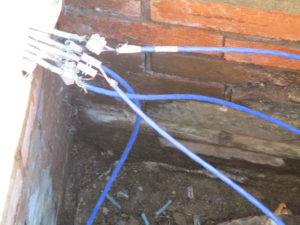 There was still rust and sludge inside the tank and it was clear to him that no necessary shot blasting had been done to take it back to the metal. There was a residue of foam and resin had been applied over the top. There were run marks down the sides of the tank indicating a poor mixture and application. The observations of poor workmanship were supported by a second independent examination.

For the forecourt examination, a petroleum inspector for London Fire Brigade was asked to attend. He concluded that the concrete finish to the forecourt was to an extremely low standard; that the tank access chambers had been left in a poor condition; that a hazardous electrical joint had been left; and there were several other indications of bad workmanship.

The professional opinions agreed there was potential for it to cause a fire or explosion and environmental contamination.

Seal pleaded guilty to failing to eliminate or reduce risks from the dangerous substances associated with the workplace including failing to undertake any risk assessment.  Proceedings against the company were discontinued after the appointment of liquidators.

The forecourt is now licensed and open but was at considerable extra cost. In addition to the thousands of pounds paid to Seal, the shopkeeper subsequently paid significantly more money to put right the poor workmanship.

In mitigation, the court was told that the tanks could have only been dangerous if they had petrol in them and that there was no evidence that petrol had been present during the works and petrol would not have been delivered to the tanks because the relevant licence was not in place. Seal did, however, accept that he had failed to do the job properly.

In sentencing, Judge James stated that Seal had held himself as a qualified expert in fuel station refurbishment who had considerable experience.  His training had however, expired and the work was of poor quality giving rise to a risk to those on site and the public if the works had not been checked by the regulators.

The limited company was subsequently forced into liquidation but not before being paid substantial money for sub-standard work which gave rise to a risk of harm.

The judge said Mr Seal had demonstrated a flagrant disregard for safety regulations and had deliberately cut corners.  Seal should not be permitted to hold himself as an expert behind the facade of a company and, taking into account the extent and nature of the offending, he was disqualified from being a company director for seven years.

Mike Hill, KCC’s Cabinet Member for Community and Regulatory Services, said: “Our Trading Standards service averted a significant risk to the community of Thanet; had this renovation been allowed to proceed the results could have been catastrophic.”

Clive Phillips, Trading Standards Operations Manager for Complex Investigations, said: “If it wasn’t for the quick and professional response of our officers there may very well have been a significant risk of explosion.  Not only could this have caused major damage and disruption it could have caused significant injuries.

“Clearly Mr Seal should not have taken on this renovation – it should have been left to the professionals.  This result sends a clear message that breaches of health and safety legislation that puts life in danger will be dealt with in the most robust way.”