A Community Alcohol Partnership (CAP) has been launched in Deal to highlight the risks of underage drinking and improve the health and wellbeing of local young people.

CAPs are made up of partnerships between local authorities, police, schools, retailers, neighbourhood groups and health providers, working together to prevent alcohol-related harm to young people and improve the quality of life for residents. 216 schemes have now been launched across England, Scotland and Wales. 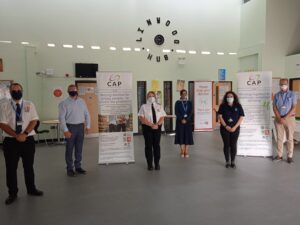 The CAP will work with youth services and local organisations to provide alcohol-free activities for young people. It will also work with local schools to take a proactive approach to alcohol education and ensure that young people are equipped to make the right decisions about issues including alcohol and drugs and anti-social and criminal behaviour. Working with local retailers aims to help them avoid making underage sales and reduce ‘proxy’ sales where adults buy alcohol for under-18s.

Neil Butcher of KCC Trading Standards, who has already set up several CAPs throughout Kent, said: “We were contacted by the KCC Early Help and Preventative Services after concerns were raised about the number of young people congregating and drinking alcohol in the Deal area.

“They’d heard about the good work that CAPs were doing to improve the health and wellbeing of young people and suggested that a CAP in Deal would be a great way of tackling the issue.

“CAP is a tried and tested way of driving down underage drinking and making safer and friendlier neighbourhoods. We believe that setting up a partnership in Deal will make a positive difference to young people’s lives and the communities where they live.”

Kate Winstanley, Director of Community Alcohol Partnerships, said: “I am delighted to see the launch of a CAP in Deal.

“Underage drinking is associated with school and educational problems, unprotected sex, drug-taking, violence and drinking problems in later life. In just over a decade CAP has set up more than 200 partnerships around the UK and our evaluations show they are having a significant impact on reducing children’s alcohol consumption, improving their health and wellbeing and enhancing the communities where they live.”

District Commander for Dover, Chief Inspector Dan Carter said: “Kent Police recognises the detrimental impact anti-social behaviour, often from a minority, can have on a community and that sometimes those issues can be linked to underage drinking.

“So the new CAP in Deal will see us working with partners to tackle any areas of concern that arise. Parents can also play their part by talking to their children about the dangers of drinking and what is acceptable behaviour and what is not. Together our efforts are stronger and will have a greater impact in keeping Deal safe.”

“This is a multi-agency approach to exploring, understanding and reducing the risks young people face outside their family home.  It is through the comprehensive work of all partners in the Dover District – including Kent Police, Dover District Council, We Are With You and local schools – that we focused on the importance of creating safer spaces locally, in particular around young people’s relationship with alcohol and the associated risks and behaviours.”

Brinley Hill, Head of Community & Digital Services at Dover District Council, said: “We understand the pressures on young people, especially over the course of the past year. Underage drinking poses a serious risk to children’s health and development and can also be associated with anti-social behaviour which affects the wider community.

“Dover District Council is committed to working with partners to support young people, and initiatives that tackle problems caused by alcohol misuse. As well as improving the health and lives of our young people, it also has wider community benefits such as preventing crime and anti-social behaviour.”

Since CAP was created in 2007, it has launched 216 schemes in England, Scotland and Wales. They bring together a range of local stakeholders with a shared interest in preventing underage drinking and encouraging responsible drinking among young adults.

CAP works by setting up and supporting local partnerships of councils, police, retailers, schools, health providers and community groups, working together to prevent alcohol-related harm to young people, improve their health and wellbeing and enhance their communities.

CAP is funded by companies which retail or produce alcohol, which share its vision to reduce alcohol harm to young people and demonstrate the industry’s commitment to social responsibility. These include some of the UK’s biggest retailers, convenience stores and alcohol producers.