Three very different schemes being undertaken with the backing of KCC’s No Use Empty initiative are nearing completion. 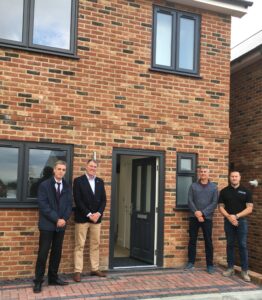 The scheme was initially aimed primarily at providing loans to assist with the renovation of empty homes to bring them back into occupation, but the scope has since been widened to include new-build projects and commercial premises.

Mike Whiting, the Cabinet Member for Economic Development, has been to visit the three projects – one for new housing, one for commercial development and the third for a challenging conversion into several apartments.

The first development by Karllee Construction involves building five houses – four semi-detached and one detached on vacant land on the outskirts of the village of Elvington following planning consent granted by Dover District Council in June last year. The land is in a long-established residential area with open farmland to the north and close to the village primary school.

The houses vary in size but each has a garden to the rear, two parking spaces to the front and a hall, lounge, dining area, WC on the ground floor and a landing, three bedrooms and bathroom with WC and shower room. 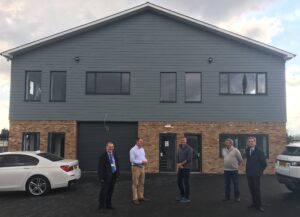 One of the five properties has already been sold, the other four are currently reserved and the NUE loan of £500,000 is now scheduled to be repaid before the original repayment date.

The second development is for commercial offices on land at Menzies Road, Whitfield, Dover.

This is the final project to be awarded NUE Growing Places Funds. Dover District Council granted planning approval in October 2018 for a two-storey office building to be created with parking on site, including charging points for electric vehicles.

The building is fully air conditioned and each of the four suites of offices provides 100 square metres of floor space. Two local businesses, an energy company and a firm of architects, have re-located from their current premises.

The third project is the conversion of a derelict former church in Beaconsfield Road, Dover. 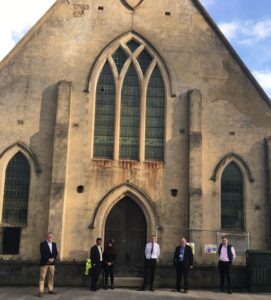 Beacon Church, located on the corner of London Road, was built around 1901. It was decommissioned and had fallen into disrepair, requiring extensive repairs and maintenance. Planning permission had been granted for the conversion of the church into five two-bedroom flats and four one-bedroom flats.

An NUE loan of £250,000 has enabled property developers Family Homes, run by Sunil Popat and his wife Gita, to undertake this complicated conversion project.

The couple bought the property at auction and have already been filmed at the church for the BBC programme “Homes under the Hammer”, with a return visit by the camera crew scheduled in the next few months when the conversion work is scheduled to have been completed. 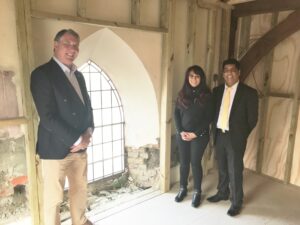 Mike Whiting with Sunil and Gita Popat at the Beacon Church in Dover, which is currently being converted into nine apartments.

After his whistle-stop tour of the projects, Mike Whiting said: “I was impressed to see great progress on three such different schemes, and delighted that our No Use Empty initiative had been instrumental in getting them under way and near completion.

“This is a challenging time for many sectors of industry, including construction, and initiatives such as No Use Empty have become increasingly important as we try to help Kent’s economy recover.”

KCC’s Programme Manager for No Use Empty, Steve Grimshaw, said: “Despite the economic situation generally, there does not appear a drop in demand of applications for No Use Empty support.”

With the construction industry now returning to work in a safe and structured way, No Use Empty is ready to administer loan applications and help Kent’s economy recover as well as delivering the homes required, whether it’s a refurbished empty property or a new build.

More successful No Use Empty projects near completion was last modified: February 8th, 2021 by Murray Evans