A selfless commitment to serving the community and improving disadvantaged young lives were among many heartfelt tributes made at a Service of Thanksgiving to celebrate the huge public contribution to Kent by Ann Allen MBE today (Wednesday, 25 May). 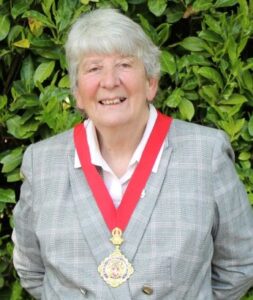 The former Kent County Council (KCC) Chairman touched the lives of thousands of people of all ages across Kent and beyond during her many years of civic service, sadly cut short by her sudden death in October 2021.

A retired catering officer for the Dartford Hospitals, and a former foster carer, Mrs Allen was first elected to the County Council in 1997. She was a member of Wilmington Parish Council from 1983 and Dartford Borough Council since 1987.

Among the roles she held at KCC, Ann chaired the Corporate Parenting Panel, displaying her deep personal commitment to improving the lives of young people in KCC’s care.

She was made an MBE for her services to the community in Dartford and Wilmington in 2014.

Wearing his mother’s Honour to deliver the Eulogy at today’s service at Canterbury Cathedral, son Jason said his mum always put others before herself and strongly believed everyone should keep doing the little things because “it is the little things in life that makes a difference.”

Jason Allen said: “Her kindness and generosity never stopped. Mum was totally honoured and privileged to serve her community. She had very little in terms of material things but always gave what she had. Most importantly she gave her time.

“Mum’s heart was firmly placed in Wilmington where she lived for over 55 years. Nothing would please her more than to raise a few hundred pounds to donate to local schools, Mayor’s charities, cubs or scout groups.

“Mum simply enjoyed helping others, and in particular helping those who were disadvantaged, and was keen that people were given an equal opportunity in life.” 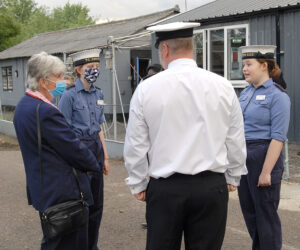 Jeremy Kite MBE, representing Dartford Borough Council and Kent County Council, said Ann brought people together, knew how to get things done and “had an amazing capacity not to respond to the people who shouted loudest but to the people who screamed silently. She would spot them across the room and she would help them.

“There are many groups affected by Ann’s loss. The young people she worked with will remember her for her encouraging words, the ability she had to make them aware there was a place for them in life even though it didn’t seem so at the time.  Her work with the elderly… it goes on.

“Ann was a friend; a guide; a help…There is a huge Ann Allen-shaped hole in Dartford at the moment. A jigsaw piece is missing and we are all part of the picture and we can try and carry on doing the very best we can and aim to be better. If we can be half as good as Ann was to our communities, we will be ok.”

Stephen Gray representing Young Lives Foundation (YLF), Ann’s chosen charity during her first term as KCC Chairman in 2019-20, said: “Ann’s support of YLF created connections for us, joined us up with other organisations so that children and young people could receive better support and these networks are still going strong. She was a great ambassador. 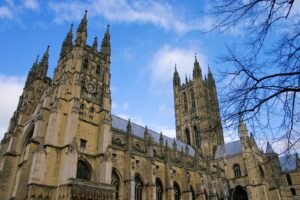 Fond memories of Ann were shared by family, friends, colleagues and representatives of the many good causes she championed in her lifetime at Canterbury Cathedral

“As Chair of the Corporate Parenting Panel, Ann had responsibility for over 2,000 children and young people in, or leaving, the care of KCC. I often think she was more ‘parent’ than ‘corporate’ and I believe this is why she was so well respected by all that she met. Ann is greatly missed and she leaves with us a significant contribution and a legacy for the long term.”

Stacey Brown, Wilmington Parish Council, said Ann: “tenaciously strived to do the best for her community. She truly was, and will remain, at the heart of Wilmington.”

During the service led by The Reverend Dr Emma Pennington, KCC Leader Roger Gough gave a reading of the famous remembrance poem Do No Stand at My Grave and Weep.

There were also many smiles as speakers shared stories of Ann’s well-known love of baking and jam-making. Stephen Gray recalled how on first meeting the KCC Chairman, his nerves were quickly put at ease as she pulled some flapjacks from her handbag and said “I made these at home over the weekend for our meeting.” She then reminded me: “I’m just Ann. No titles. Just Ann.”

Memories of kindness shared as Ann Allen remembered was last modified: May 25th, 2022 by Scarlett Elworthy