Communities will continue to be protected from illegal HGV parking despite central government’s decision not to extend Kent County Council’s current temporary powers to deter the growing problem, KCC’s Head of Highways has pledged. 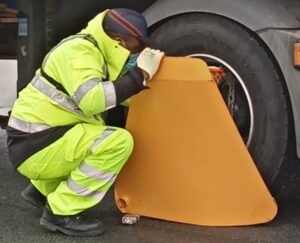 The County Council was initially given the authority to clamp and fine unlawfully parked trucks over five tonnes in restricted zones across seven districts and boroughs from 1st January for six months to help tackle the escalating issue on routes to Channel ports.

Given its success, KCC requested a further six-month extension while separately consulting on introducing a permanent ban. This six-month call for views closes on Saturday 3rd July.

Setting out the case for extending the parking ban pilot to the end of January 2022, KCC said in a letter to Rachel Maclean MP, Parliamentary Under Secretary of State for Transport, the fact further customs changes have been put back to the new year, major events such as the Open Golf Championships are due to take place in Kent over the next few months, and passenger traffic has yet to return to the road network, it would be ‘short sighted’ not to continue.

Simon Jones, KCC’s interim Corporate Director and Director of Highways, said: “Having the ability to take action against illegally parked trucks has helped keep our roads moving, protected our local communities and played a significant role in the Kent Resilience Forum’s operational response as Kent, and the UK, adjusts to life outside of the EU.

“We have targeted those areas where unlawful lorry parking causes the biggest problems and we have received positive feedback from many residents and businesses.

“The KRF also recognised the ban would help reduce the risk of disruption in the face of new pressures, such as the expected return of tourist traffic, to Kent’s roads over the coming months.

“In light of this, while we welcome the Roads’ Minister’s commitment to consider future localised restrictions and use of emergency powers in the event of border issues due to customs changes in the new year, it is disappointing not to have our current broader temporary enforcement powers extended.

“I want to assure Kent communities we will continue to monitor lorry parking closely. We will also be scrutinising views received on making the ban permanent, and combining our conclusions with what we have learnt over the past six months, before making a further recommendation to government.”

Kent County Council is also continuing to discuss with DfT, districts and boroughs, the long term issue of lorry parking in Kent and urging that solutions be found outside of the county.

Simon Jones added: “Working together with industry, businesses and residents, we want to make sure Kent is a safe and vibrant place to live and visit.”

To find out more about the lorry parking ban consultation visit the following link, and register to leave comments, here: https://kccconsultations.inconsult.uk/consult.ti/County_Wide_HGV_prohibition/consultation