Kent County Council Trading Standards, supported by Kent Police, swooped on Swanley Market in a crackdown on the sale of counterfeit goods.

“As well as undermining local legitimate businesses, fake goods can also ruin Christmases because they are of inferior quality and fail to conform with safety standards. 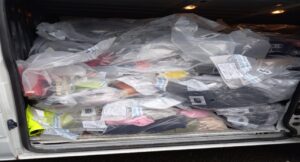 Items filling 168 evidence bags were seized during the joint operation

“For all these reasons we will continue to work in partnership with Kent Police to crack down on this illegal trade and urge people to report anyone selling counterfeit goods in their community.”

Kent Police Inspector Matt Atkinson said: “If something seems too good to be true, it probably is. Don’t be fooled into thinking you’re getting a great deal, you may be buying stolen or counterfeit goods.

“Buyers will often find that their purchase turns out to be poor quality and this may make the product unusable or even unsafe.”

How to report it

* If you think you have been sold counterfeit goods, or if you suspect somebody is selling fake products, get advice from the Citizens Advice consumer helpline on 0808 223 1133.

* If you suspect you have been offered stolen property call Kent Police on 101.