Kent’s accessibility, combined with its relative affordability, is driving demand from a range of business occupiers who are now seeing it as a viable alternative to other parts of the South East, according to the 2019 Kent Property Market Report.

The growing strength of demand is placing the county firmly on the radar for investors and developers, especially for industrial property investors, notably for warehousing and logistics.

With limited investment stock, some are looking to develop speculatively, but more is needed in order to fulfil the growing occupier demand for business space in the county, according to the team behind the report.

Produced by Caxtons Chartered Surveyors, Kent County Council and Locate in Kent, the 28th edition of the Kent Property Market Report reveals the county has performed well thanks to the strengthening perception of its relative value for money. It has also mirrored national trends and performance.

The report identifies that house prices in Kent remain relatively affordable compared with the rest of the South East and this is driving housing demand, particularly in the county’s commuter towns.

Significant numbers of new homes have been earmarked for Ebbsfleet Garden City, Ashford and Otterpool near Hythe, with the prospect of attracting more people to move to Kent. With a growing population, the report argues more needs to be done to persuade national office developers and investors to choose Kent in order to provide the all-important places to work.

Activity in the office market has been driven by local business growth, with smaller floorspace lettings resulting from a shortage of space. The districts with new accommodation in the pipeline, such as Canterbury, Ashford and Maidstone, are seeing greater activity, especially from the emerging knowledge-based and creative industries.

Despite confidence holding back decisions, Kent’s town centres have seen a number of significant office lettings over the last 12 months. Additionally, there is more serviced office space coming on stream. Demand for prime office space remains strong across Kent, with a lack of supply resulting in an average rental increase of four per cent during the last year.

Investment in the business park market has been relatively quiet, although demand is more buoyant than the previous 12 months. The need for space has been driven by an ongoing presence and growth of professional services, and emerging high-growth knowledge-led businesses in the life sciences, tech and creative industries.

“Our industry hopes the Brexit situation is resolved soon as it should have positive implications for business investment, driving expansion and relocation, with an obvious knock-on effect for everyone involved.”

The report was launched to an audience of more than 230 property agents, developers and investors at Ashford International Hotel. After a presentation by Sue Foxley from Caxtons of the report’s main findings, the recently appointed Leader of Kent County Council, Roger Gough spoke, followed by presentations by Peter Corr, Centre Manager of McArthurGlen Designer Outlet Ashford, and Liz Peace, Chair of the Government Property Agency. 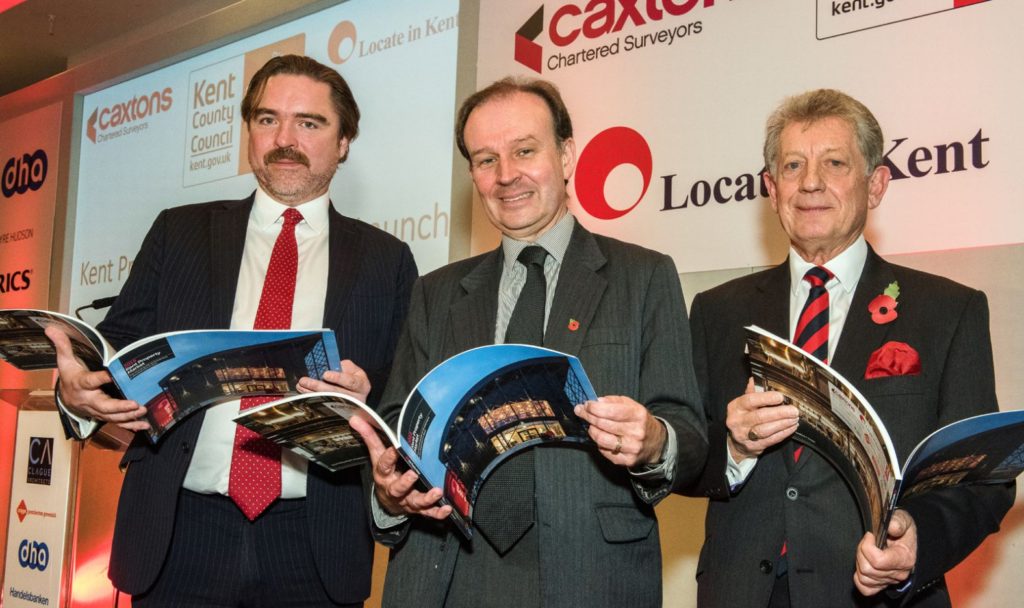 The report highlights that the industrial sector has been the best performing, aided by strong national demand for more warehousing and logistics space stimulated by structural changes to the retail sector and Brexit preparations.

Kent’s cost-effective location close to London and continental Europe has resulted in the north of the county being the biggest beneficiary of industrial property investment. Demand for distribution space is having a positive impact on rental growth. Caxtons’ average Kent industrial rent rose to £92 per ft2 with annual growth of almost 11 per cent to June 2019, ahead of other sectors.

The retail sector continues to struggle, with many national household names – notably Debenhams and some brands in Arcadia Group’s portfolio – announcing major closures. On a positive note, vacant units are gradually being absorbed by independent retailers, restaurants and leisure occupiers. Local authorities have shown their long-term confidence in their town centres, with many making significant property investments, such as Medway Council’s purchase of the Pentagon Centre for nearly £35m.

As part of a major £90m investment in Ashford, Europe’s leading owner, developer and manager of designer outlets McArthurGlen welcomed 50 new retailers and 500 jobs, when its expansion opened in November.

Leader of Kent County Council, Roger Gough, said: “This year’s report looks at how Kent has fared throughout the last year and I’m pleased to say the county’s economy has maintained its resilience.

“I believe Kent remains the best place to invest with major initiatives and projects to support growth and economic development in our county as we head towards 2020.

“I am grateful to our partners at Locate in Kent and Caxtons and all the sponsors for another impressive and informative annual review of the property sector in Kent.”

Gavin Cleary, CEO Locate In Kent, added: “While Brexit has had an impact, the message from this year’s report has to be one of opportunity. Across a range of sectors we are seeing strong investor interest; what we are lacking, in some key areas, is the right space to meet that demand.

“Kent is one of the best connected regions of the UK with a number of key investment sites available now that hold incredible promise for the years ahead – from the provision of more flexible working space for the county’s vibrant creative and digital scene to addressing a lack of quality five star hotel accommodation.

“The 2019 Kent Property Market Report once again shines a light on the growing depth of demand, but also the diversity of the county’s offer from the incredible work taking place at our science parks to the innovation in the manufacturing and food and drink industries.”

For more information and to download a copy of the 2019 Kent Property Market Report, visit www.kentpropertymarket.com