A KCC highways’ steward has been commended after performing life-saving CPR for a man who collapsed at the side of the road.

Keiron Greenaway, 28, was on duty driving along Seabrook Road in Folkestone when he spotted an elderly man walking along the footpath towards the seafront.

The man lost his balance and fell to the floor and began to lose blood from a head wound.

Keiron, who has worked for KCC for a year, said: “I stopped the van as quickly as possible and ran over to him; he was in a bad state.

“He was bleeding from a cut to his head and losing substantial amounts of blood. 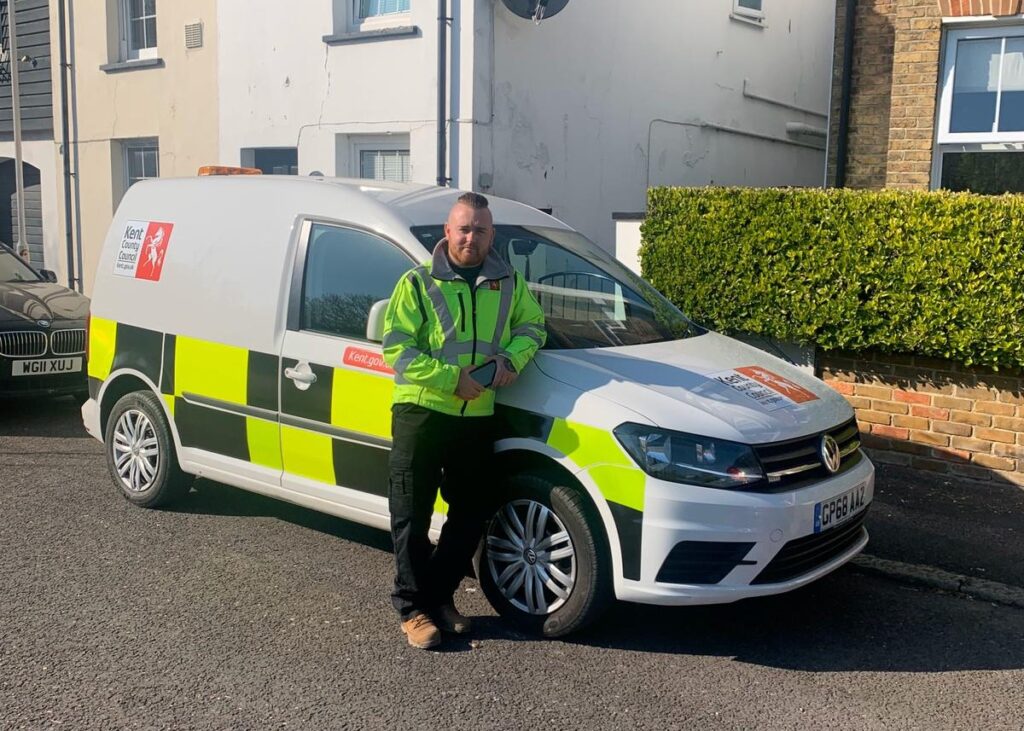 Keiron Greenaway, 28, was on duty driving along Seabrook Road in Folkestone

“I used the dressings from my first aid kit, but it wasn’t enough to stop the bleeding.

“I used my hi-vis jacket to support his head and took off my t-shirt and twisted it around his head to try and cause pressure to stop the bleeding.”

Fortunately, Keiron trained in first aid whilst serving in the Army.

The Hythe resident continued: “I’d called for an ambulance but the gentleman started to become very pale and not very responsive and within a minute or so I found myself giving CPR to the best of my ability to keep him breathing.

“When they ambulance arrived the paramedics caught a pulse and within what seemed seconds he was in the back of the ambulance and off to the hospital.

“When I cleaned the clothes and dressings from the highway it was clear that my clothes were full of blood.

“Whilst all these things are replaceable, I couldn’t help but worry whether I had done enough to help this gentleman or was there something better I could have done.”

With the help of social media, Keiron, originally from Wales, was told the man had dementia and had been struggling with recent medication but was on the mend.

He added: “After trying to find out how he was doing – not being family I couldn’t get this from the hospital – I asked on a local neighbourhood app and found out he is doing well and is due out soon. I’m really glad to hear he’s OK.”

Michael Payne, KCC Cabinet Member for Highways and Transport, was proud of the actions taken by Keiron.

He said: “Faced with a situation like this, Keiron’s efforts were truly heroic, particularly during a time when we’re being told to stay away from each other to protect our health.

“I’m incredibly proud of the way he acted in stopping the blood flow and performing CPR in what must have been a frightening and challenging situation by the side of the road.

“Our Kent Highways staff are recognised by government as key workers and not only are they keeping our highways safe in these unusual times but, as Keiron has shown, they are also extra eyes and ears for our residents themselves during the lockdown.”