Students from Pent Valley in Folkestone and Thamesview School in Gravesend will be joined by Provinciall Technisch Instituut in Kortrijk and Middenschool Van Het GO! from Ypres in Belgium to hold football matches to mark the centenary of the games that took place during the World War 1 Christmas Truce – in a project backed by Prince William.

The match is part of the Football Remembers project from the British Council, The FA, the Football League and the Premier League – which will see every level of football mark the anniversary in a week of commemoration.

It will take place on Wednesday 17 December and the first match kicks off at 1pm at Three Hills Sports Park, Folkestone. 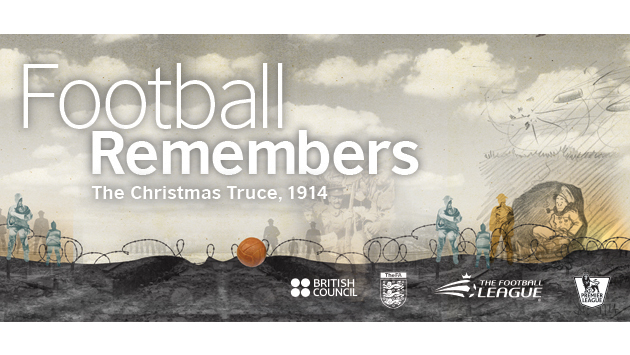 Over 70 Students from across the four schools will participate in a number of learning activities together related to the Christmas Truce before then playing a football tournament which will commence with the Last Post being played by one of the students before the matches start.

The schools are currently working together in a European Funded Comenius Regio project “EASIER – Facing the Great War” where the students from the two countries are researching their shared history of the Great War.

At the end of the matches all participants will receive medals and the students will all exchange gifts, in the spirit of the Christmas Truce.

Jim Cadman, author of The Black Football Heritage Book, in partnership with The National Children’s Football Alliance, has donated a copy of the Heritage Lottery Funded book to each participant.

During the First World War, he served in the Middlesex Regiment and fought at the Battle of the Somme in 1916.  He was commissioned a Second Lieutenant on 30th May, 1917.

Tull was commended for his gallantry and coolness whilst fighting in Italy leading 26 men on a raiding party in enemy territory.  He was killed in action on 25th March 1918.

Each participating school will also receive a limited edition Poppy football to kick off their games.

The schools will mark the occasion by tweeting a photo of the two teams standing together with the hashtag #FootballRemembers and the name and location of the school.

Their image will be featured on a special website – www.footballremembers.com – where it will sit alongside photos from teams across the country, including some of football’s biggest names.

The website will be a permanent tribute to the soldiers who laid down their arms on Christmas Day 1914.

The students have been learning about the Christmas Truce with the help of a Football Remembers education pack, which more than 30,000 schools across the UK received in May. It includes resources to help children learn about the Truce – including eye-witness accounts, photos, drawings and letters from soldiers some of which have never been published before.

Mario Citro, Headteacher at Pent Valley Technology College said: “We feel very proud as a sports academy to be taking part in such a special event especially because we are in a town like Folkestone  which has such a rich association with WW1.”

Harry Ingham, Headteacher at Thamesview School said: “Being involved in Football Remembers has been a great opportunity to involve our students in a cross country project.

“Our students really appreciate getting to know fellow European students. The poignancy of the anniversary and the importance of peaceful communications have been crucial aspects of the project and will enable our young people to gain a thoroughly global perspective.”

HRH The Duke of Cambridge, President of The FA said: “We all grew up with the story of soldiers from both sides putting down their arms on Christmas Day, and it remains wholly relevant today as a message of hope over adversity, even in the bleakest of times.”

Vicky Gough, Schools Adviser at the British Council, said: “The impromptu games of football that happened along the Western Front 100 years ago are an incredible example of how people-to-people connections can triumph in the midst of a global conflict. It’s a powerful lesson for all our children.”