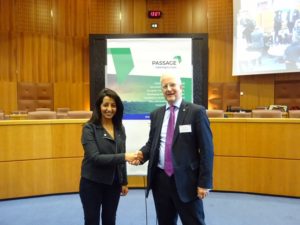 Michael Payne and Karima Delli, President of the Commission for Transport and Tourism in the European Parliament

A joint declaration has been signed recognising the climate emergency and pledging to “seize every opportunity to contribute to the decarbonation of the maritime industry”.

The declaration was made at the final conference of the PASSAGE European Interreg Project which is looking at making the transition to a low-carbon society and low-carbon economy.

The project is led by Pas-de-Calais Council, with KCC one of 11 partners, all of which are members of the European Straits Initiative.

Kent County Council Cabinet Member for Highways and Transport Michael Payne attended the final conference and signed the Joint Declaration for the Low-Carbon Transition of the Maritime Industry.

The wording for the final draft was amended by Mr Payne and was accepted by the ten other European countries present, representing maritime straits ranging from Greece to Finland.

The Joint Declaration was signed at the regional council of Pas-de-Calais in Arras.

Mr Payne said: “The impact of emissions from the maritime industry on communities in our county shouldn’t be underestimated.

“In Pas-de-Calais for instance, 31% of all harmful emissions are attributed to having come from the Straits of Dover, 2% of which from the French ports themselves.

“Here in Kent, with a coastline 333km in length, we too are potentially susceptible to a large percentage of harmful emissions being generated at sea rather than by land based activities.

“This declaration of partnership working is yet another step that KCC has taken towards its ambition for the emerging Energy & Low Emissions Strategy, which has recently been out to consultation.”

The main aim of the strategy is to provide a framework to ensure energy security as well as allowing for clean growth into the future.