KCC’s outgoing chairman Mike Angell has handed over the chain of office to his successor Ann Allen in a ceremony at County Hall on Thursday (23 May). 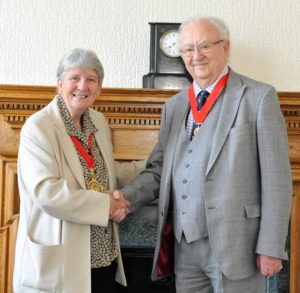 Reflecting on the past year, Mr Angell, who represents Ashford Rural East, said: “I have spent much of the past year meeting the wonderful people of Kent, including volunteers, local businesses, young entrepreneurs, serving or ex-service personnel and new citizens, and I am heartened by their commitment to Kent and all they do to help make it the great place it is.

“It has been my privilege to serve as the Chairman of the Council and I will always be thankful for the opportunity.”

Mr Angell’s charity for the year has been the Samaritans, for whom he has raised more than £4,500, which includes £2,106.00 donated by The London Beach Hotel in Tenterden following his charity dinner there in February.

“I have been privileged to chair the Kent and Medway Civilian Military Partnership Board and help support our serving and ex-service military personnel.  It was a particularly proud moment for me, as an ex-Navy Officer, when the County Council received the Ministry of Defence Employers Recognition Gold Award.”

“I was also pleased to present awards to Kent Highways depots in Aylesford and Ashford which gave me the opportunity to say ‘thank you’ for the hard work that they do.

“Finally, it was a great privilege to attend many Citizenship Ceremonies and to be able to witness those involved enjoying a very happy situation in being presented with their certificates.”

Mrs Allen was first elected the county council in May 1997 as the Member for Dartford South West Division, which is now Wilmington Division. She has held posts in the Chief Whip’s Office for 16 years and has been Deputy Cabinet Member for Children, Young People and Education and currently chairs the Corporate Parenting Panel.  Mrs Allen is also the Learning Disability Champion for the council.

The theme for Mrs Allen’s year as Chairman will be “a celebration of youth” and she has chosen the Young Lives Foundation as her charity for the year.

The Vice-Chairman will be Mr Graham Gibbens, who was elected to KCC in June 2001.  Mr Gibbens will be standing down as the Cabinet Member for Adult Social Care and Public Health, a post he has held since 2009.

His successor in that role is Clair Bell, who was first elected to KCC in 2017 for Ashford Rural East Division. Mrs Bell has served on the Environment & Transport, Scrutiny, Personnel, Flood Risk Management and Electoral & Boundary Review committees.

Mrs Bell said: “It is an honour to be appointed to the role. I am looking forward to working with our excellent officer team, partners in health and the voluntary sector and members across the council to shape and deliver modern social care and public health services to our residents, meeting the rising demands of the 21st century.”

Mr Gibbens was first elected to KCC in June 2001 and represents Canterbury City North. He has been Cabinet member for Adult Social Care since 2009.

He said: “It has been a great opportunity over the last ten years to improve the quality of life for people who are elderly, socially isolated or have social care needs.

“I look forward in my new role to continue to support the interests of the most vulnerable in our community.”

KCC’s outgoing Chairman reflects on a memorable year was last modified: May 24th, 2019 by Murray Evans