A drain cleaning blitz will begin in Tunbridge Wells next week, Kent County Council has announced.

The authority, which is responsible for the maintenance and operation of the drains and pipework connecting to the public sewers, said work will begin from July 23.

During the programme, parking restrictions and possibly some out of hours road closures will be needed. KCC has asked drivers not to ignore these signs as parked vehicles can prevent cleaning from taking place.

The intensity of the rainfall seen recently meant surface water was unable to enter the sewer network fast enough and can cause the sewers, as has happened in Nevill Street, to back up.

A detailed design has now been completed to direct some highway surface water directly to the River Grom, that flows beneath the Pantiles, instead of to the combined sewer.

Work is scheduled to start in August and expected to take around three weeks to complete in the Nevill Street and Warwick Park area.

Some traffic disruption is likely; however, it is hoped to keep this to a minimum by carrying out the works during the summer holidays.

KCC cabinet member for highways Mike Whiting said: “I’ve seen the devastation that flooding has caused in Tunbridge Wells and we are determined to do our best to prevent it from reoccurring.

“We can never completely eliminate the risk, but we can, and will, do things to prevent it as much as possible.

“Over the course of the most recent flooding, the town experienced extreme rainfall in a couple of hours and sections of the highway drainage system, which are not designed to accommodate downpours of such intensity, were overwhelmed.

“Whilst our drains are routinely cleaned, if people are concerned drains are becoming blocked, we ask that residents report them to us on 03000 418181 so that additional cleaning can be arranged.”

A large part of the roads around Tunbridge Wells town centre are minor roads and therefore the drains are cleaned on a targeted basis in response to reports of blockages or flooding.

All the drains on the main roads are cleaned annually and some roads in the town centre are routinely attended twice yearly, however, this does not prevent additional cleaning should the need arise.

Councillor Dr Ronen Basu, Sustainability portfolio holder at Tunbridge Wells Borough Council said: “It’s excellent news that KCC has announced this drain cleaning blitz. Local businesses and residents should not have to experience the dreadful conditions and uncertainty they faced recently because of blocked drains.

“Tunbridge Wells Borough Council’s teams cleared over two tonnes of waste the morning following the floods, that is our job, but it means those staff are being diverted from other duties which is not a good use of resources.

“We will continue to work with KCC and Southern Water and encourage them to find a lasting solution that will address the issues.” 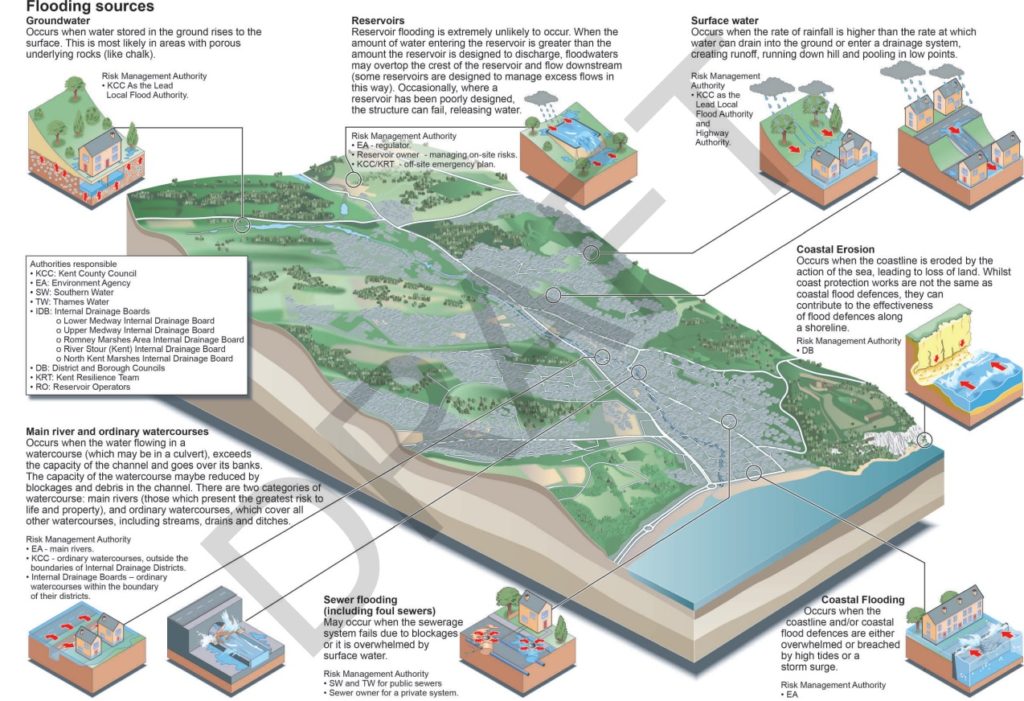 Mike Tomlinson, Southern Water’s surface water management plan manager said: “Flooding is a complex and emotive issue and one for which many agencies and organisations – including councils, the Environment Agency, highways authorities, landowners and water companies – are responsible.

“We are committed to actively helping and supporting other organisations and the local flood resilience forums to address the issue in Tunbridge Wells and are playing our part by working with the Council to produce a detailed flooding report.

“This will enable all parties to properly understand the issues, as well as allowing us to look at the systems to investigate any opportunities for us to make our network more resilient, in order to help alleviate any future flood issues in the area.”

As a precaution, a tanker will be placed on standby at the local depot to ensure a timely response should flooding occur.

Arrangements for cleaning have been made to the following roads: