Roger Gough was officially elected to the post at the full council meeting having been voted in as leader of the majority Conservative group on the council two weeks earlier. In both roles he succeeds Paul Carter, who has held them for the past 14 years.

Mr Gough has served as the Member for Darent Valley since 2005 and has served in a variety of Cabinet roles since 2006.

He will be relinquishing responsibility for Children, Young People and Education to take up his new position.

Before entering local government, Mr Gough worked in investment banking for 16 years until 2002, mainly as an investment analyst specialising in the banking industry.

His wife Michelle is a former deputy leader of Sevenoaks District Council. The couple have two children who attend Kent state schools.

In his first speech as Leader, Mr Gough told Members: “We are the body that speaks for Kent, that sets out a vision and gives a voice for the county. We reflect that to the people we represent, to partners and to government. No one else has the role or mandate to do this.

“But we don’t do it alone or always through direct control. There will be areas in which our formal powers are limited but no one else can take the all-round view of the county’s needs, convene partners and help structure the debate and conclusions. Even if much of that is then delivered by others.

“We know the big challenges that we face: housing pressures, often from London, often without the matching jobs or infrastructure. Gaps in skills and opportunities, and between the west and the coastal east of the county. An ageing population and what that means for health and social care.

“The ongoing pressures on Special Educational Needs and, on those children, and their families. It is the greatest regret and disappointment to me as I hand over my portfolio to a successor that we have so much further to go in that area.

“In addressing those and in addressing what we discussed earlier on, those will be the priorities of the new administration. Securing adequate funding infrastructure is in part a funding issue one that if not resolved could put an unsustainable burden on this council. But we must also not forget how much it is also something that gives that sense to residents of the pressures that grow on them, of the undermining of quality of life in this county.

“There has in fact been good progress in the work between Kent leaders, county and district and seeking to address this but there is further to go on that and as Paul mentioned earlier on, much of that must also be addressed truth again to national government about where policy needs to change. If there is to be growth the infrastructure must be there to match it.

“We have great beauty here in Kent, both natural and manmade and we must ensure that the public realm enhances and does not tarnish it. So it will be an early priority for the administration to focus every last bit of headroom we can find on those visible services through our council plays its part in people’s daily lives.

“In the longer term a key related priority to the quality of life here will be the delivery of our energy and low emission strategy and the ambitious targets for zero carbon that were discussed at a recent county council meeting, particularly focusing on improving progress from our own estate. Central to this will be a new dedicated cabinet portfolio for the environment.

“From the Saxon Shore to the North Downs, from Romney Marsh to Tunbridge Wells, from the deep history of Becket and Augustine’s Canterbury to the bright modernity of Ebbsfleet and the Thames Gateway this is a great county. What a privilege here for all of us to serve it. I will do my very best.”

Mr Gough was among several members, including leaders of the opposition parties, who paid tribute to the outgoing leader, Paul Carter.

Paul Carter responded: “Thank you all for your kind and generous words, I am overwhelmed.

“I have enjoyed every moment of the last 14 years as County Council leader and 22 leaders as a county council and I hope that windows do open for me in the areas that I would like to be involved in.

“I said 14 years ago I would do the absolute best to serve the people of Kent and this council. It’s been full throttle all the way.”

Peter Oakford, who has been the Member for Tunbridge Wells North since 2013, is continuing as the Deputy Leader of KCC.

He has previously been a member of Tunbridge Wells Borough Council and Chairman of Southborough Town Council, having overseen the £10million community hub project.

Mr Gough says his new cabinet reflects a wealth of experience as well as being reflective of the people of Kent.

He said: “I am delighted to announce the Cabinet Member team which is a mixture of new appointments and familiar faces who bring a wealth of experience to their roles.

“We need and I aim to achieve a Cabinet that reflects the people of Kent. I am therefore pleased that there is an increase in female Cabinet members who now make up almost half of the Cabinet.

“It is also important to note that we have a new role in the Cabinet focusing on the environment which is a high priority.

“I would like to thank the previous Cabinet Members for their hard work and service, which is counted and valued.

“I look forward to working with my new team to set out our vision and reflect the views of the population of Kent.

“We know the challenges that face us, and we have a wide democratic mandate to set out our strategy and vision to make a very visible difference to the quality of life for our residents.”

The cabinet members in alphabetical order are: 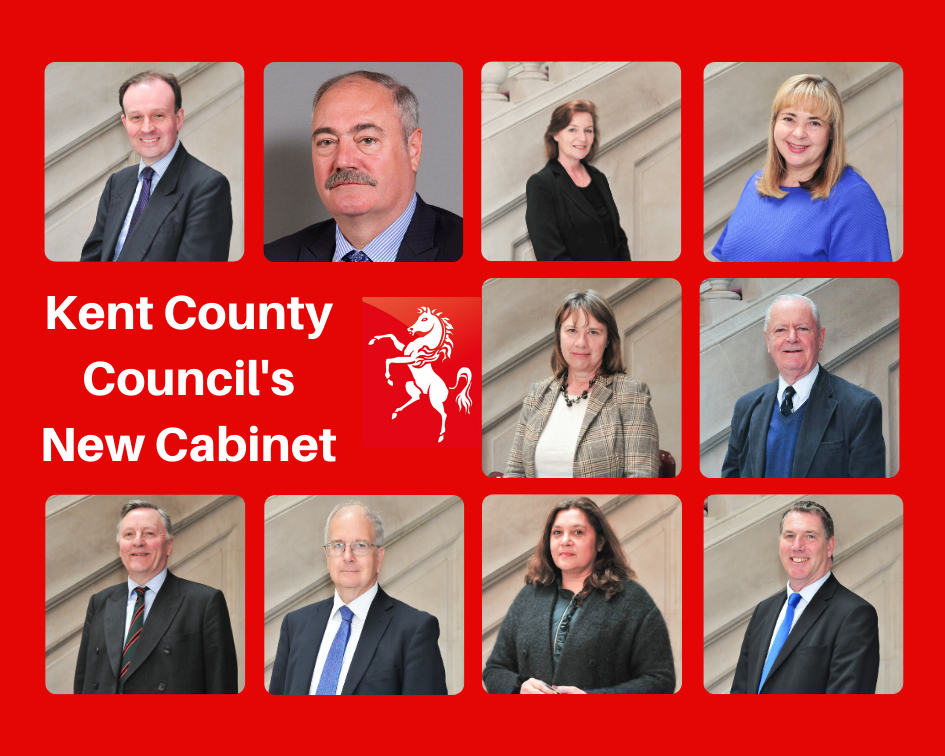