The discovery of a rare Elizabethan-era shipwreck near Dungeness is being featured on national television this (Sunday) evening.

The remains at Denge Quarry were uncovered earlier in April by a team from Cemex, the company dredging for aggregates at the site. 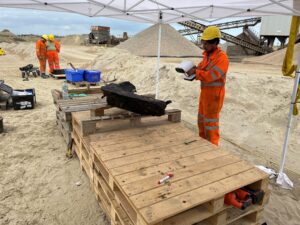 An archaeologist working on the Elizabethan shipwreck.

Casper Johnson, a Senior Archaeologist at KCC, visited the quarry to examine the timbers. He said it was immediately clear from the construction methods, size of timbers and lack of iron elements, that the remains were likely to date from the 17th or even 16th century date.

Experts in marine heritage at Historic England agreed on the national importance of the findings and KCC worked with Wessex Archaeology to develop a detailed project design to secure funding for recording and interpretation.

More than 100 timbers from the ship’s hull were recovered, with dendrochronological analysis (tree-ring dating), funded by Historic England, indicating the timbers were made of English oak and dated from 1558 to 1580.

After the recording, which involved dismantling the timbers and digital laser scanning, the timbers were placed back at the bottom of the quarry and covered with light silt to protect them for the future.

The story of this rare Elizabethan ship will feature in “Digging for Britain” on BBC2 at 8pm this evening, with presenter, Alice Roberts in the studio with Wessex Archaeology Marine Archaeologist, Andrea Hamel, and Antony Firth, Head of Marine Heritage Strategy at Historic England. 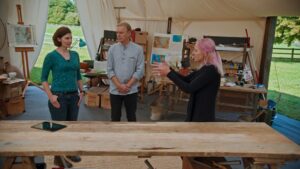 Professor Roberts said: “Who expects to find a historic shipwreck in a quarry?

“Luckily the workers recognised they’d stumbled on something quite extraordinary and called in the experts from Wessex Archaeology.

“This large piece of a hull is so well preserved, it’s giving us precious insights into Elizabethan shipbuilding.”

Although the ship is still unidentified, it represents an era when English vessels and ports played an important role with the Channel serving as a major route on Europe’s Atlantic seaboard.

Casper Johnson said the shingle quarry at Denge, operated by Cemex, had existed since the 1940s. Although there was no specific planning mechanism for the securing of any archaeological works discovered at the site, Cemex, had been “exemplary” in facilitating the recording and storage of the ship’s timbers.

KCC’s Cabinet member for Environment, Susan Carey, said: “Cemex deserve our thanks for recognising they’d found something worth reporting and it’s been great to see the partnership working on this project which saw KCC’s Heritage Conservation coordinate the project and the input of our Minerals Planning Team.”

Andrea Hamel, Marine Archaeologist at Wessex Archaeology, said: “To find a late 16th-century ship preserved in the sediment of a quarry was an unexpected but very welcome find indeed. The ship has the potential to tell us so much about a period where we have little surviving evidence of shipbuilding but yet was such a great period of change in ship construction and seafaring.”

Antony Firth, Head of Marine Heritage Strategy at Historic England, said: “The remains of this ship are really significant, helping us to understand not only the vessel itself but the wider landscape of shipbuilding and trade in this dynamic period. Cemex staff deserve our thanks for recognising that this unexpected discovery is something special and for seeking archaeological assistance.

“Historic England has been very pleased to support the emergency work by Kent County Council and Wessex Archaeology, and to see the results shared in the new season of ‘Digging for Britain’.