A day of enforcement action to combat the incorrect and fraudulent use of Blue Badges has been carried out in Swale.

Kent County Council’s Counter Fraud team joined Swale Borough Council’s Parking team as they visited several streets and car parks on Thursday (4 August) to check that the badges were being used by the authorised person and in the correct way.

Throughout the day civil enforcement officers were trained on how to inspect blue badges and taught about the importance of establishing if badges were being used in accordance with the scheme. The inspections took place in Sittingbourne, Faversham and Isle of Sheppey. 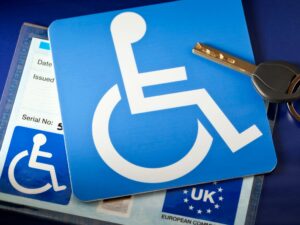 Blue badge holders spoken to throughout the day, welcome the news and gave positive feedback about the need for badges to be inspected on the Borough.

In total 209 people had badges inspected and most people spoken to were using the badge in accordance with the scheme. The civil enforcement officers ceased 13 badges that had expired and spoke to an additional 13 people regarding blue badges and answered any queries that arose regarding the scheme.

One legitimate Blue Badge holder, who had his badge inspected in Sittingbourne, said: “I am glad that Blue Badges are being checked, considering the amount of misuse that I have personally witnessed.”

The eligibility criteria change has increased the number of badges used in Kent. It is therefore paramount that available spaces are used for legitimate purposes.

Clair Bell, KCC’s Cabinet Member for Adult Social Care and Public Health said “The Blue Badge scheme is there to support vulnerable people in maintaining independence and access to services.

“Abusing the scheme by using badges not belonging to you, deceased people’s badges and stolen badges for personal gain is unacceptable and will not be tolerated.”

“The Blue Badge Scheme is an important service for people with disabilities or health conditions that enables badge holders to park close to where they need to go.

“While most blue badge holders respect the rules of their use, KCC along with Swale Borough Council will not tolerate the abuse of the system by the minority who take advantage of the scheme.”

Cllr Elliott Jayes, vice-chair of the community committee at Swale Council, said: “We were pleased to be teaming up with KCC to tackle the fraudulent use of blue badges.

“The majority were used correctly and those who were found to be abusing the scheme were dealt with appropriately.

“We will be cracking down on the misuse of blue badges in Swale, and this joint enforcement day is just the beginning.”

Anyone suspecting misuse of a blue badge is asked to report it online at www.kent.gov.uk/reportfraud.