KCC’s new Chairman Graham Gibbens took over the reins from his predecessor Ann Allen in a virtual ceremony yesterday (17 June). 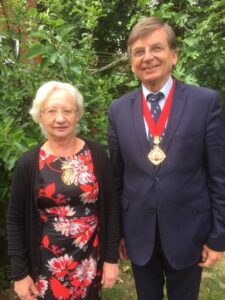 Because of restrictions imposed due to the pandemic, which also caused the annual meeting to be delayed by a month, Members were unable to meet as usual at County Hall, so carried out their business – including the handing over of the Chairmanship – via the internet.

Mr Gibbens was first elected to KCC in June 2001 as the member for Canterbury North. On becoming Vice-Chairman a year ago, he stood down as the Cabinet Member for Adult Social Care and Public Health, a post he had held since 2009.

Mr Gibbens’ professional career was in international banking during which he was employed by Australia and New Zealand Banking Group, with a last appointment in Karachi, Pakistan. He has also worked as an independent consultant with governmental and non-governmental organisations in Europe, Africa and Asia.

He was an inaugural member of the Kent Health and Wellbeing Board and is committed to supporting the most vulnerable members of our community, including the homeless and those suffering with mental health issues.

On becoming Chairman, Mr Gibbens said: “This is a great honour for me and I am looking forward to the next few months, which will bring unprecedented challenges to our county.”

The theme for Mr Gibbens’ term as Chairman will be “Supporting Vulnerable People” and he has chosen to support Porchlight as his charity for the year.

Mr Northey said of his appointment: “I am looking forward to working with Graham. We have always been great friends and I know that he will be an excellent Chairman, and I will do all I can to support him in his new role.”

Outgoing Chairman Mrs. Allen has supported Young Lives Foundation during her year of office and, despite the lockdown for the last few months, has raised £1,889 for her charity.

She said “Working with Young Lives Foundation has given me a wonderful opportunity to support some of Kent’s most vulnerable young people and to be able to help forge new relationships with groups across the county to help provide training and care packages to help them.”

On her 12 months as Chairman Mrs. Allen said: “I have been able to visit so many interesting organisations across Kent and have seen so many worthwhile voluntary groups and so many people helping our residents, particularly over the last few months when we have been in the grip of this pandemic

“Finally, although my year hasn’t ended as I had hoped it would, I can say that I feel proud and honoured to have served as Chairman of Kent County Council and it was a great privilege for me to be able to highlight so much of the good work that goes on across our county.  Graham has been a huge support to me as Vice-Chairman and I know that he will be a great Chairman.”