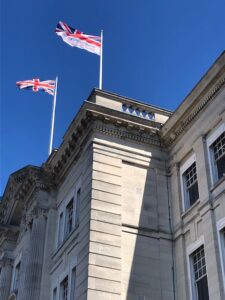 Speaking at the flag-raising ceremony, Lesley Game said the annual campaign was a time to recognise the vital role the Armed Forces play in protecting the nation, both at home and overseas, and to remember those who have given their lives so others can have securer futures.

Following swiftly on from the 40th Anniversary of the Liberation of the Falklands on 14 June, Councillor Game said it was also a moment to honour the brave troops who fought in this brief but bitter war, several hundred of whom were killed in action or severely injured.

Oliver Richardson – KCC’s Armed Forces Champion – will also attend the Reserves Day gathering and Kent Reservists and Veterans are welcome to come along.

Personnel from 579 Field Squadron and 3 Princess of Wales’s Royal Regiment will staff an Information Stand in the Atrium of Invicta House on Tuesday, from 9am, so residents can find out more about life in the Reserves and the crucial role they play in national security – from countering security threats, peacekeeping and humanitarian efforts abroad to supporting communities at home..

KCC Chair Lesley Game, who is also Chair of Kent Civilian-Military Partnership Board, said: “The defence of our country, its people and their interests, is fundamental to our wellbeing and prosperity and those who assume the responsibility of delivering it take on a vital and sometimes daunting challenge.

“The men and women in our Armed Forces, past and present, who are prepared to make the ultimate sacrifice have consistently risen to that challenge in magnificent fashion to keep Britain safe and free, no matter the difficulties that they continue to face. 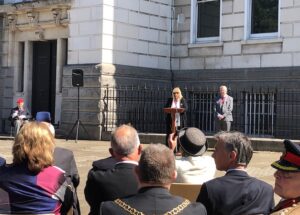 “Regulars, Reservists and their families, who bear so much on our behalf, and especially those in Kent, have more than earned the nation’s gratitude. We salute them all.”

Kent is home to three regular Army bases, with over 2500 service personnel and 1000-plus service children and their families living in the county. Kent also hosts 8 Reserve Centres with 486 Reservists and 5,860 Cadets.

In October 2018, Kent County Council was granted a Ministry of Defence Gold Employers Recognition Award from His Royal Highness Prince Edward, the Earl of Wessex. The honour formally recognised KCC as a military-friendly employer for providing outstanding commitment and continued support to the Armed Forces, including the many Reservists, Veterans and Cadet Adult Volunteers who work for, and with, us.

To find out more about supporting the Armed Forces, visit the ‘Supporting Armed Forces’ section on KCC’s website here