Olympic gold medallist Lizzy Yarnold has been presented with a very special award by the chairman of Kent County Council.

The Kent Invicta Award recognises residents of Kent who have achieved excellence in their chosen field or who have provided an exceptional service to the county. 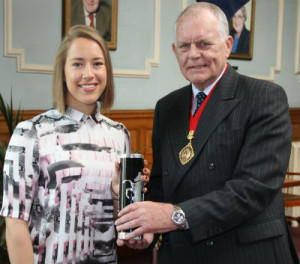 As part of the award Lizzy was also presented with a cheque for £5,000 which she can give to a charity of her choice. She has decided to share the money between the mental health charity Mind, andSlideaway, a bereavement support service based in Kent.

“I am absolutely thrilled and very honoured to have received this recognition from Kent County Council. Thank you all from the deepest part of my heart.

“The fact that it comes with a substantial amount of money that I can give to a charity of my choice is really fantastic. I’ve chosen to give £3,000 to MIND because, after the high of the Winter Olympics, I was worried that I may come back home and feel rather low and depressed. None of us knows when or if we will ever need this fantastic charity. The other charity is Slideaway, a Kent based support network for bereaved children who do some amazing work.”

Lizzy is a Kent girl who went to primary school in Otford before moving on to Maidstone Grammar School for Girls where she became Head Girl. She won the 2013-14 Skeleton World Cup before going on to take the gold medal in the 2014 Winter Olympics in Sochi.

“I, like so many Kent residents, was glued to the television during the Winter Olympics to watch Lizzy’s progress.

It was an amazing triumph to win by almost a second following her earlier success in claiming the World Cup Championship. Kent is extremely proud of our new Kent Invicta Award winner.”