People are being asked their views as a consultation launches today (Tuesday) on designs for new signalised junctions at the A251/A2 junction in Faversham.

It comes as part of £1.7 million plans to ease congestion and queuing on the A251 Ashford Road and improve turning onto the A2 Canterbury Road.

The crossing within the scheme will make it safer for pedestrians to cross the A2 and A251.

KCC proposes widening the A251 Ashford Road, removing part of the verge to accommodate an additional lane which would filter traffic turning left onto the A2. 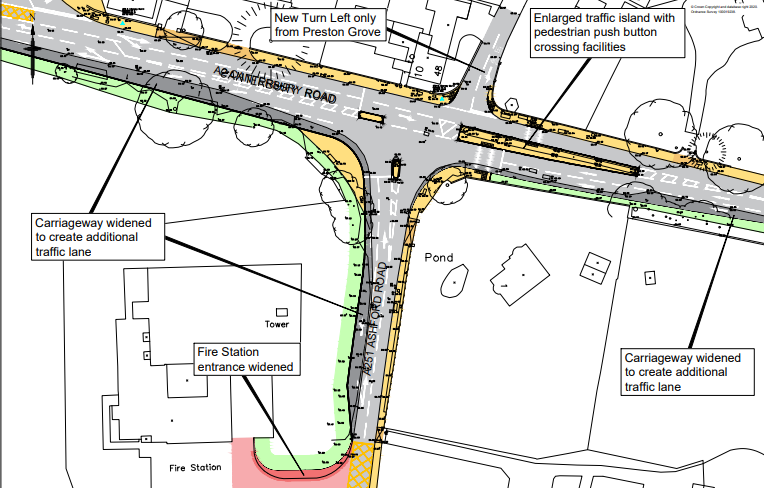 The southern side of the A2 would also be widened to provide an additional lane on the approach to the proposed signals. This would allow traffic to turn left onto the A251 or continue straight ahead along the A2.

The signals would allow traffic to flow left or right from the junction, easing the current congestion issues.

To improve road safety with the introduction of the traffic signals, KCC is also proposing that vehicles would only be able to make a left hand turn from the junction of Preston Grove onto the A2.

KCC Cabinet Member for Highways and Transport Michael Payne said: “This much needed improvement for traffic in Faversham has been a long time in gestation but I am pleased to say that Kent Highways are now in a position to progress with their plans.

“Back in 2014 we consulted with residents on proposals to improve the junctions and two options, a roundabout and a signalised junction, were presented.

“The consultation responses favoured a signalised junction and ultimately Kent Highways officers agree that this would deliver the best improvements to congestion.

“Where there is space, the pavements will also be made wider allowing more room for pedestrians as well as making it safer for them to cross the A2 and A251.”

Works could start in October, subject to the required land being purchased, with the first stage of work seeing the removal of the verge for the proposed left-hand turning lane on to the A2. Completion would be mid-2021.

To take part in the consultation, visit kent.gov.uk/a251junctionimprovements

The closing date for this consultation is midnight on Monday, September 14.