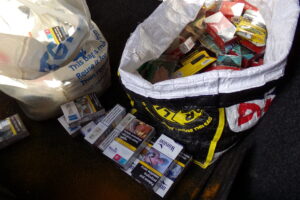 Part of the wider Operation CeCe – a National Trading Standards initiative in partnership with HMRC to tackle illegal tobacco – two shops in Cliftonville, Margate, and one in Ramsgate, were targeted.

Officers seized 43 pouches of hand-rolling tobacco, 217 packs of cigarettes and £2000 cash suspected to be the proceeds of crime.  Some of the tobacco had been hidden in vehicles close by to the shops.

Kent Police Sergeant Tom Couzins, from Thanet Community Policing Team, said: “As part of the work against organised criminal groups, my officers work regularly with Trading Standards to identify businesses which might be used for illegal practices such as money laundering or human trafficking.

“The sale of illicit tobacco, using shops as fronts to pose as genuine businesses, can have a detrimental impact on legitimate local traders. It can also attract anti-social behaviour and fund further criminal activity.”

Clive Phillips, Operations Manager for Kent County Council Trading Standards, said: “For as long as this illegal trade continues, we will work with our enforcement partners using all available tactics to disrupt this activity.

“The sale of illicit tobacco undermines local legitimate businesses so we will do everything in our power to protect the safety and rights of the residents and businesses of Kent.

“Illegal tobacco brings organised crime into communities while making smoking more affordable for young people and those attempting to quit.”

Shops selling illegal tobacco can be reported anonymously through 0300 999 6 999 or by visiting www.stop-illegal-tobacco.co.uk