Thousands of illegal cigarettes and hundreds of illicit vapes were seized by Kent Trading Standards and Kent Police in the latest operation to tackle the unlawful tobacco trade in the county. 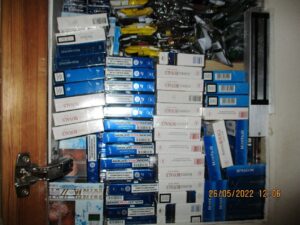 Just some of the products discovered by officers

Working in partnership with HM Revenue and Customs (HMRC), the multi-agency team carried out targeted raids on several retail premises, private residences and vehicles thought to be involved in supplying illegal tobacco.

Part of the ongoing national initiative to crack down on the illicit trade – Operation CeCe – officers visited locations in Dover, with Dover District Council in attendance, and Thanet, over a two-day period.

Supported by a specialist search dog team, officers were able to locate concealed stores of illegal tobacco, including stashed behind a bathroom mirror. In total the team visited: 4 retail premises and 2 private residence and searched 2 vehicles where, in total, they recovered approximately 15,400 cigarettes, 10kg of hand-rolling tobacco and some 400 illegal vapes.

An additional 3 mobile phones were also seized along with a vehicle that had been storing tobacco; 1 person was arrested for questioning.

“We will work with our enforcement partners using all available tactics to disrupt this activity and protect the safety and rights of the residents and businesses of Kent.”

Shops selling illegal tobacco can be reported anonymously through 0300 999 6 999 or by visiting www.stop-illegal-tobacco.co.uk

Inspector of Dover Community Safety Unit, Paul Barrell, said: “Frequently the cash raised from selling illicit tobacco will be used to fund organised criminal groups as they carry out other illegal activities.

“Our officers have a good local knowledge of the communities they patrol and will regularly work with other agencies to gather information and identify offenders in order to deal with this issue robustly.”

“Having removed 13 million illegal cigarettes, 4,300kg of hand rolling tobacco and almost 110kg of shisha products from sale in the first year of the operation, the National Trading Standards’ initiative, in partnership with HRMC, continues to successfully disrupt this illicit trade.”