Trading Standards officers in Kent have carried out a series of targeted raids and seized thousands of illicit tobacco products. 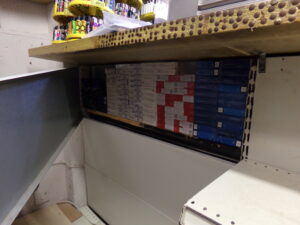 Supported by a specialist search dog team, officers visited 6 premises and located concealed stores of illicit tobacco in five of them.

The illegal products included 30,540 cigarette sticks and 14kg of hand rolling tobacco, 247 pots of shisha and 79 illegal vapes. The illegal products were found hidden behind sophisticated hides which were uncovered with the help of the detection dog.

Officers also discovered that an electricity meter had been bypassed and also  identified possible immigration offences which are now being investigated. 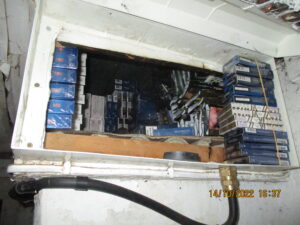 “The sale of illicit tobacco undermines local legitimate businesses and puts money into the pockets of organised criminals. We will do everything in our power to protect the safety and rights of the residents and businesses of Kent.”

“The sale of illicit tobacco also makes smoking more affordable for young people and those attempting to quit. Shops selling illegal tobacco can be reported anonymously through 0300 999 6 999 or by visiting www.stop-illegal-tobacco.co.uk “

PC Tristan Foster, from Kent Police’s Thanet Community Policing Team, said: ‘The sale of illicit tobacco is not a victimless crime – as well as any health risks these products could bring to those who buy and use them, their sale can also fund organised criminality. It is often used as a means of money laundering to fund a range of illicit activities from terrorism to modern slavery.

‘We will continue to work with partner agencies to seize goods and disrupt the criminality supported by their sale.’

Cllr Stuart Peall, Cabinet Member for Enforcement, Regulatory Services, Waste & Building Control at Folkestone and Hythe District Council, added “As evidenced from the results of this operation, it is crucial for us to work with our partners in ensuring that premises within the county are meeting the correct trading standards.

“We ask if anyone is aware of incidents of illegal activity, then you can report it to Kent Police or Crimestoppers.”

Cllr George Kup, Cabinet Member for Community Safety and Youth Engagement for Thanet District Council, said: “Along with our partner agencies, we are committed to the fight against cheap and illicit tobacco.

“These successful raids should send a strong message to businesses not cooperating with authorities when it comes to making our district a better place to live. Illegal tobacco is not a victimless crime – it harms legitimate businesses and society in general due to tax not being paid, facilitates the supply of tobacco to underage people and supports organised criminal networks.”

“I would like to thank all of the partners for their hard work on this operation as well as members of the public for reporting illegal sales. I encourage everyone to continue to do this and help reduce the harm caused by tobacco in our communities.”