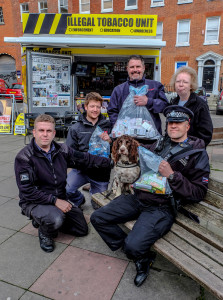 A major campaign to raise awareness of the dangers posed by illegal tobacco sales takes place in Thanet this week.

Trading Standards Officers from Kent County Council will be working alongside Kent Fire and Rescue, the Margate Task Force and representatives from Public Health at a series of roadshows at five different locations from Monday (4 April) to Friday.

Members of the public are being invited to find out more about the work being done to stop illegal tobacco and see demonstrations by specialist search and detection dogs.

These specially trained dogs assist Trading Standards Officers and Police Officers on visits to shops suspected of dealing in the illegal tobacco trade.

Visitors will also be encouraged to report anonymously any shops suspected of being involved.

The purpose of the roadshow is to promote three key messages: that illegal tobacco brings crime to the area because suppliers are often linked to drug dealing, money laundering, people trafficking and even terrorism; that it encourages youngsters to start smoking; and it deters others who are trying to give up smoking.

Steve Rock, Head of KCC Trading Standards said: “Smoking is one of the biggest causes of ill health, and illegal tobacco is likely to be sold to children and undermine people’s attempts to quit smoking.

“Illegal tobacco requires organised transport and supply networks, which means organised crime comes into an area, the sales funding other criminal activity, at the expense of the local community and economy.

“The tobacco and cigarettes are often hidden behind false walls or in secret drawers, and so we use sniffer dogs as they are vital in detecting these hidden illegal stashes.”

Dates and venues for the trailer are as follows:

If you know anything about illegal tobacco in your area, report it anonymously on the illegal tobacco hotline on 0300 999 0000. Find out more at www.kent.gov.uk/tradingstandards.