KCC Highways is carrying out trials of “hot foam technology” as part of the council’s commitment to look at alternative methods of weed control on the county’s roads and footpaths. 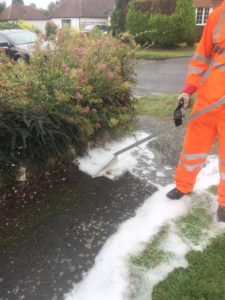 Weeds get the “hot foam” treatment from KCC Highways staff.

Members have expressed concern over the safety of using weed-killer sprays containing glyphosate because of suggestions that the chemical could be linked to some forms of cancer.

Mike Whiting, KCC’s Cabinet Member for Highways, said: “Although glyphosates are widely used and have not been banned by the Health and Safety Executive or the Department of Environment, Farming and Rural Affairs, we think it is right to consider members’ concerns about this issue.

“We are carrying out the trial on the Hales Place Estate in Canterbury.

“Half the estate is being treated with herbicide as usual and the other half will receive a hot foam treatment. We will monitor the estate for weeds before and at periods after the trial to compare and measure the effectiveness of the different treatments.”

He said results comparing the two processes should be available early next year.

Hot foam is hot water with added vegetable-based products to make a foam which is then sprayed onto the weeds. The hot foam clings to the weed and so keeps it hotter for longer and has more time to damage the weeds vital systems.

KCC Highways carried out similar trials with this type of machinery in the Thanet weed trial between 2009-2015. Advancements in technology since then may have improved its efficiency and reduced costs.