From this morning, Operation Brock has been brought in on the M20 as an extra tool for managing disruption in Kent.

The M20 contraflow will be in effect from north of Junction 8 (for Maidstone) to Junction 9 at Ashford.

Operation Brock queues lorries bound for mainland Europe on the coastbound M20 and uses a contraflow on the London-bound carriageway to enable other traffic to travel in both directions.

Traditionally when there has been severe disruption to cross-channel services, sections of the M20 have been closed and used to queue HGVs heading for mainland Europe, under arrangements known as Operation Stack.

In November 2017 the Government announced that, alongside ongoing work to find a permanent solution for Operation Stack, Highways England would take forward interim alternatives for Operation Stack that could be ready for use in March 2019, and that, crucially, would keep the M20 open in both directions

Under the new arrangements, in addition to the M20 contraflow lorries can be routed to Manston Airfield and, if needed, the M26 motorway can be closed and used to queue HGVs too.

Since Operation Stack’s 32-day deployment in summer 2015 we have been working tirelessly with our partners across Kent to make the county more resilient to disruption than ever before. Operation Brock strengthens this resilience even further and offers a safe, scalable response to disruption that can be used to queue up to 11,000 lorries heading for mainland Europe, while keeping other traffic flowing for people living, working and travelling in and around Kent

The deployment will help to demonstrate Kent’s preparedness for disruption and allow the contraflow to be in place for any traffic disruption in the coming weeks.

Three lanes in each direction could be restored, with a 50mph limit, if Operation Brock is assessed as unlikely to be required in the following weeks.

From today, drivers will need to follow the different layout on the M20 from just north of Junction 8 (for Leeds) to Junction 9 (Ashford).

For the preparations for the M26, there will be overnight closures on the weekend of 30 March.

Operation Brock has stages that can be deployed sequentially, scaling up or down to meet demand.

This is how Operation Brock will work:

The arrangements offer a significant improvement to Operation Stack and, crucially, keep the M20 motorway open to traffic in both directions in all but the most extreme circumstances.

For more information on Operation Brock and other contingency measures in Kent, visit:

What is Operation Brock?

Operation Brock is a set of measures to keep the M20 open in both directions between junctions 8 and 9 in the event of disruption to services across the English Channel, by using different holding areas.

The queuing system only applies to lorries heading to mainland Europe from Kent. All other drivers should check conditions before setting out and, if they’re crossing the channel, check with their service operator for updates.

Phase 1 – In the event of excessive disruption to services across the English Channel, improved holding capacity in the Port of Dover and Eurotunnel, as well as on the A20 approach to the port (Dover TAP), would be used.

Phase 2 – If phase 1 capacity is reached, we will start queuing Europe bound lorries that are 7.5 tonnes and over on the coast bound section of the M20 between junction 8 and 9 with cars and other vehicles using a contraflow on the London-bound carriageway.

Phase 3 – If phase 2 becomes full, lorries heading for Port of Dover will be directed to Manston Airfield, while the M20 is used to hold traffic for Eurotunnel. Traffic lights on the A256 after Manston Airfield will help to manage traffic arriving at the port.

Phase 4 – If the M20 holding area and Manston becomes full, the M26 could be used to hold additional lorries heading for Eurotunnel. 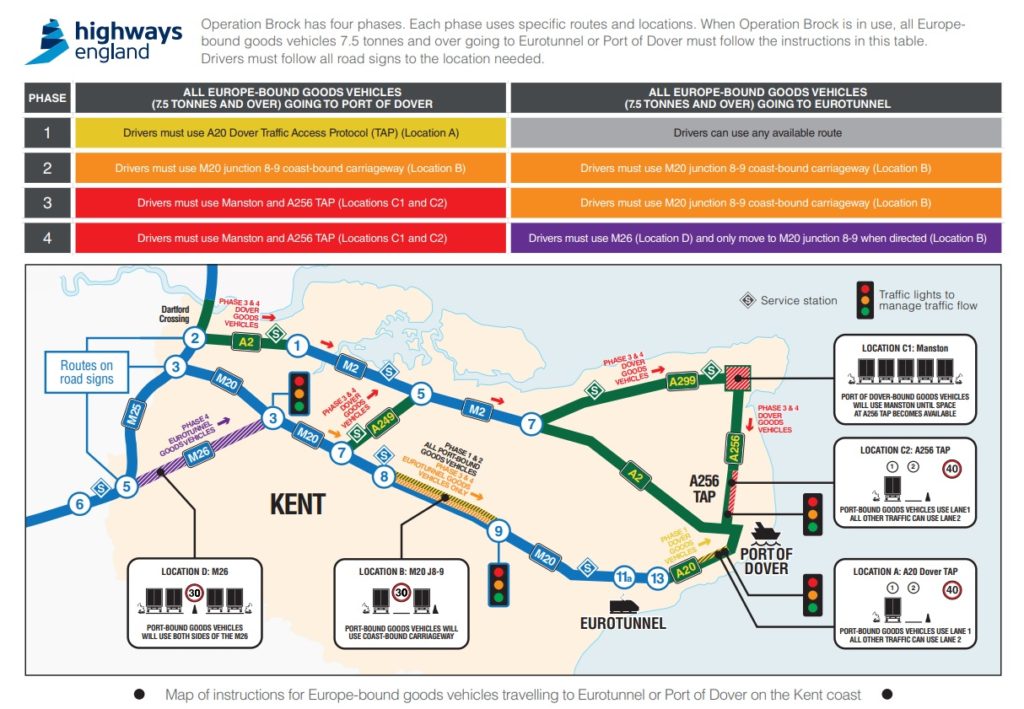