A new £2.5 million bus interchange in Gravesend has been officially opened.

Construction of the Gravesend Bus Hub began in June 2021 and was led by Kent County Council (KCC) with contractors FM Conway. 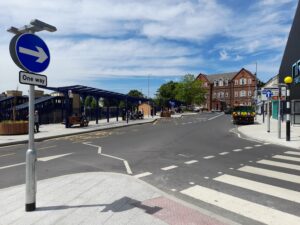 It has been designed to improve transport connections between rail, bus and bike.

Buses have been using the hub while works have been completed in phases, until the official opening held on 21st June. 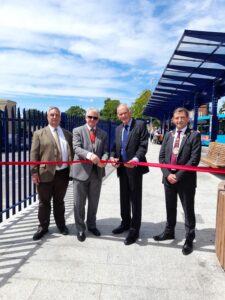 Gravesend Bus Hub was specially designed to link with the Rathmore Road scheme.

KCC’s Cabinet Member for Highways and Transport, David Brazier, said: “I was thrilled to officially open the Gravesend Bus Hub, which is the final phase of the Gravesend Transport Quarter master plan.

“It is only by improving transport infrastructure like we have done here, that we can encourage people to use more sustainable transport methods.

“I commend the work of officers whose hard work and dedication have meant we have successfully been able to bring this project from concept to completion.”

Leader of Gravesham Borough Council, Cllr John Burden, said: “As we work towards becoming a net zero borough by 2030, it is important we encourage people to think about leaving their cars at home when they travel into Gravesend town centre.

“The new bus hub creates an easy central public transport point in town, whether people are coming in to shop, for a night out or to travel to and from work.

“I’m glad we could contribute to ensuring the hub has all the facilities, including new public toilets provided by ourselves, that people might need to encourage them to change the way they travel.”

FM Conway Site Agent, Martin Jech, said: “It was wonderful helping to improve part of Gravesend’s town centre, with such a focal point as, the bus hub.

“The use of high-spec materials, such as granite kerbs and paving, high quality street furniture, planting and road surfacing, really brought the whole scheme together.

“The project included demolition of some buildings and stabilising of the station car park bank before a large amount of underground infrastructure was installed.

“We hope this pilot project, completed in cooperation between KCC, FM Conway, Gravesham, Waterman, Arriva, Fastrack and many other stakeholders, will serve the people of Gravesend for many years to come.” 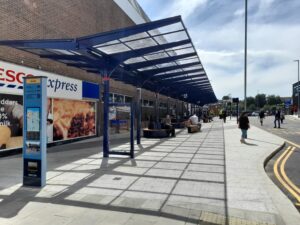 “This project will help to reduce congestion, improve accessibility and ensure rail, bus, walking and cycling routes are fully integrated. We are delighted to see the Gravesend Bus Hub officially open and operational.”