Kent County Council’s support for ex-service personnel and Reservists has been recognised today with the Ministry of Defence Employers Recognition Gold Award – just one year after receiving the silver award.

KCC’s close relationship with the Military was cemented by the re-signing of the Kent Armed Forces Community Covenant in 2017 to enable the armed forces community to access public services without fear of disadvantage.

The council says it is firmly committed to addressing countywide issues relating to the Armed Forces Covenant including school admissions, employment, housing, health and welfare issues as it widens the understanding of the needs of the military and veterans including the above relating to families of current or ex-servicemen and women. 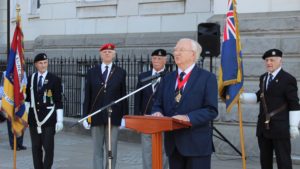 In addition it works closely with the county’s 12 district and borough councils, plus Medway, through its network of Armed Forces Champions and Covenant Lead Officer Champions.

KCC says it appreciates the valuable contribution that Reservists make to the UK Armed Forces, their communities and the workplace and offers 10 days’ paid leave to those working for the council.

Council leader Paul Carter said: “We are absolutely delighted that KCC’s support for the forces has been yet again recognised in this very public way.

“Kent County Council, as one of the largest employers in Kent, is a very military and forces-friendly employer, strongly supporting the employment of service leavers and veterans. We are developing further positive support to the recruitment of service spouses, ex-service personnel and partners.

“KCC did not just re-sign the Covenant but has actively sought and found ways to make it a reality in Kent, day in and day out.”

He said the council had formed the Kent and Medway Civilian-Military Partnership Board  with unanimous political support from all political parties. It provides support to employees who are reservists or veterans and uniformed cadet forces.

Canon Peter Bruinvels,  KCC’s  Civilian-Military Liaison Adviser, said: “Having seen the links with the military in Kent grow closer and closer over my time with Kent County Council, it is no wonder that the MoD deemed us to be a worthy Gold Award recipient.

“Kent County Council has shown the gold standard of commitment to supporting members of Armed Forces, veterans and their families. They have taken really meaningful steps to ensure the Defence community based in Kent are not disadvantaged by the sacrifices that they have made or make in helping keep Britain safe and free”.

Mr Carter added: “Kent County Council has made it clear that regardless of size, location or sector, employing people with military skills is good for business.”

“Our Reservist policy is second to none and one of the most generous. Our service children are really helped in finding schools of their choice and our veterans are treated with respect and helped in a number of ways.”

The South East Gold Awards Ceremony will be held in London later in the year.

Gold award for KCC’s support for the military was last modified: August 2nd, 2018 by Murray Evans