A seven-year-old girl who longed to give presents to children who ‘won’t be with their mummies and daddies’ this Christmas has collected almost 800 gifts – with a little help from some special people.

Lilly Osborne, who lives near Borough Green, came up with the heart-warming idea after enduring a tough Christmas herself last year.

The generous little girl, a pupil at Platt Primary School in St Mary’s Platt near Sevenoaks, wanted to help other children who may have had upsetting experiences before being taken into care. 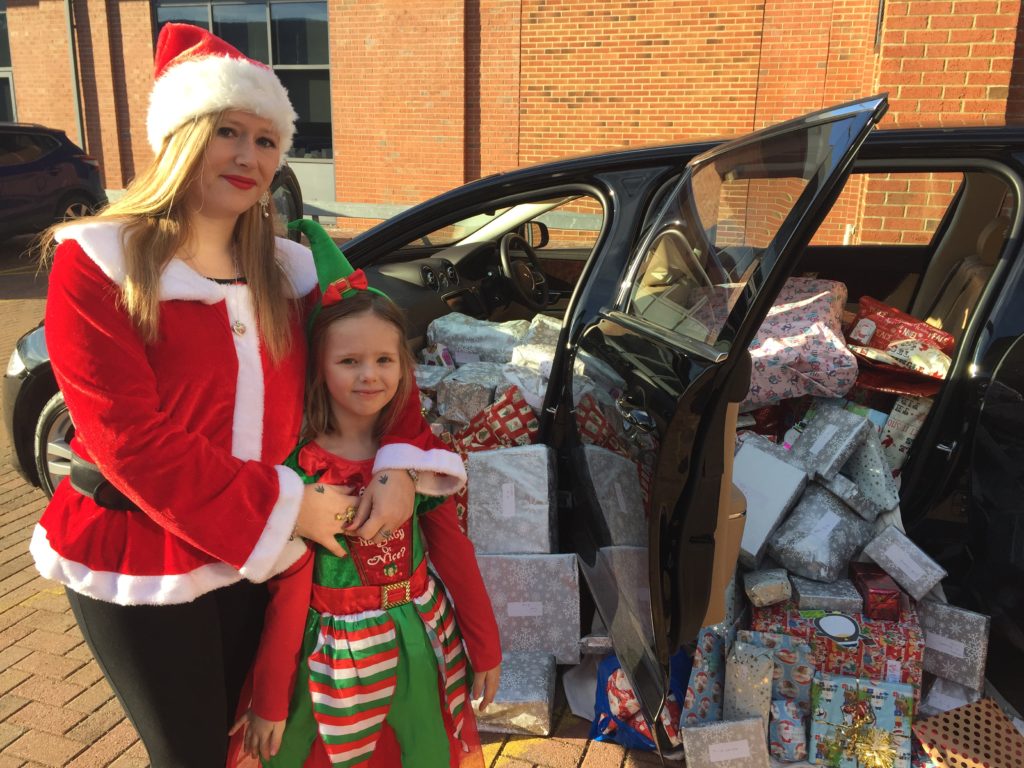 Her aunt and guardian, Melisa Robinson, explained: “Lilly and I were talking one night and she was asking about other children who, like her, weren’t with their birth parents at Christmas.

“During Lilly’s first Christmas with us money was tight because we’d had to buy everything new for her – a new bed, clothes etc. Kent County Council’s local Social Services team helped with access to grants and allowances – without them she wouldn’t have had any presents last year.

“Lilly and I decided to wrap some Christmas presents up for the children who ‘aren’t with their mummies and daddies’ as she put it. She even offered to give them all her presents. Now we’re in a better situation financially we wanted to give something back. 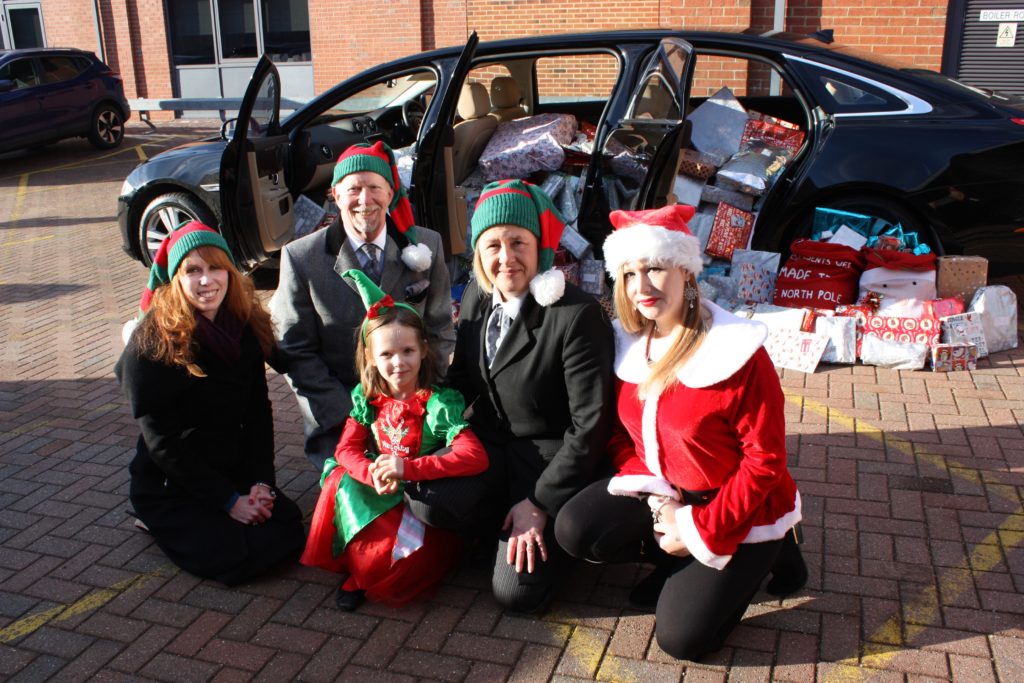 Lilly added: “Everybody should be happy, especially at Christmas.”

Melisa wrote a post on her own Facebook page asking whether anyone else would like to donate a gift and before she knew it hundreds of people were offering presents.

Melisa’s mum Pamela Pines works for funeral director Welham Jones and when managing director Simon Welham and his daughter Rebecca heard about Lilly and Melisa’s wish they agreed to help.

The company, which has branches in Borough Green, Tunbridge Wells, Sevenoaks and Tonbridge, as well as others outside Kent, let the little girl keep all the presents she collected at one of its premises and agreed to deliver them.

Within just two weeks Lilly and Melisa had amassed almost 800 gifts and had painstakingly wrapped each one and labelled it to say which age and gender it would be best suited to. 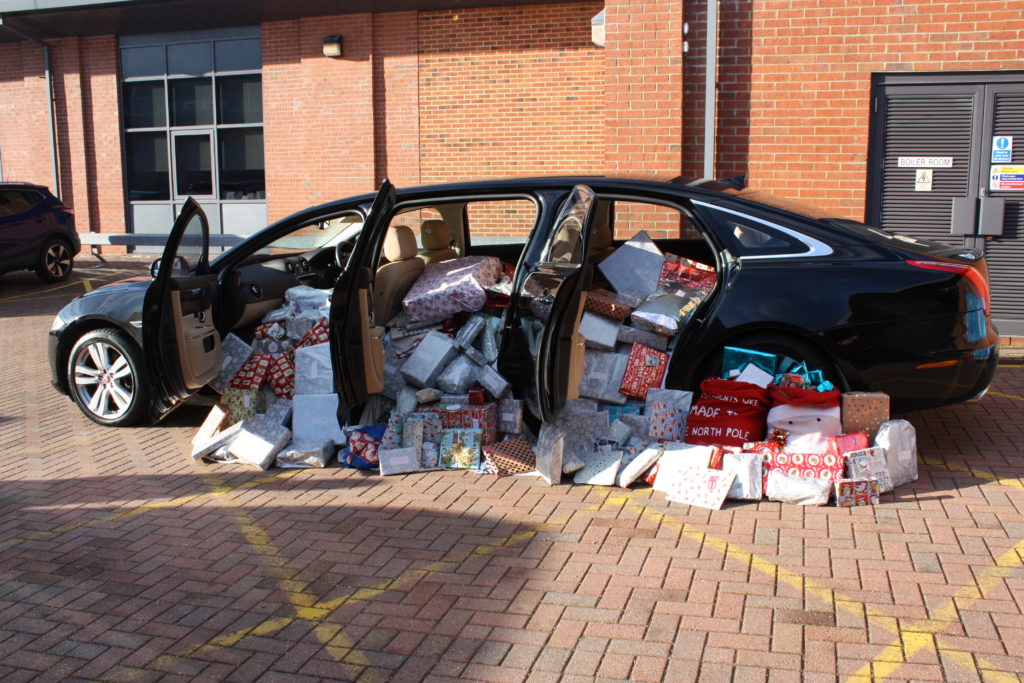 The generous donations include brand new toys that will be on many Christmas lists this year, vintage toys from the 1980s still in their original packaging, books, DVDs, craft kits and more.

About 200 presents were dropped off at KCC’s Kings Hill offices on Tuesday (December 19) and will be distributed to children in care across Kent.

Roger Gough, KCC’s cabinet member for children, young people and education, said: “We are extremely grateful to Lilly, Melisa, Pamela, Simon, Rebecca and everyone at Welham Jones for thinking of others this Christmas and working so hard to collect all these gifts for children who are in care over the festive season.

“It is also fantastic that so many people across Kent felt moved to donate a present and help make Christmas that bit brighter for children who are not with their families at this time.” 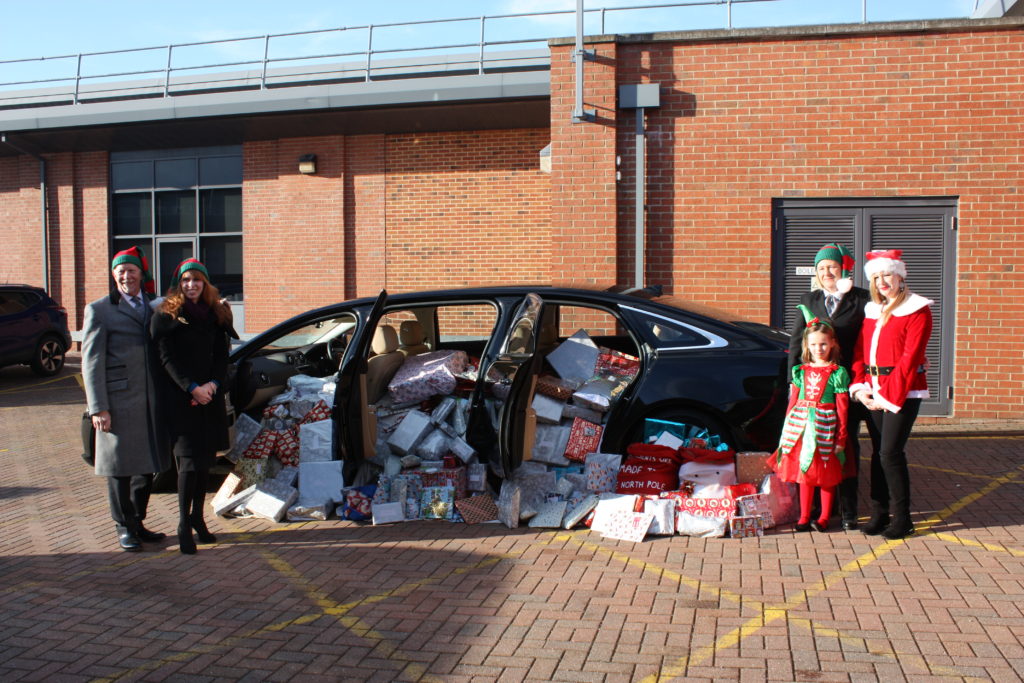 Melisa continued: “I just wanted to put the feelers out to see if anybody was interested in donating. Within hours I had hundreds of people banging on my door, I went out into rural areas collecting and Lilly and I spent hours wrapping and labelling.

“The bulk of the donations came from Borough Green residents and members of Sevenoaks Women’s Forum (SWF) on Facebook, and my friend Vikki Holland collected more than 100 presents from the people of Tonbridge.

“People have gone above and beyond and I can’t thank them enough, I just don’t know how to put it into words.

“It’s been a real community effort, everyone has pulled together.

“It’s been a lot of hard work but to me it was worth it. If I can help make children smile on what is the most magical day of the year then that’s something.”

Melisa, who has three children and a stepson as well as Lilly, is already planning an even bigger present collection next year to bring smiles to even more children’s faces for Christmas 2018.

Girl, seven, collects presents for children who ‘won’t be with their mummies and daddies’ this Christmas was last modified: December 21st, 2017 by Suz Elvey