With Storm Eunice’s extremely strong winds set to bring significant disruption to the southern half of the UK on Friday, Kent Resilience Forum (KRF) leaders are urging local residents and people needing to travel in or through Kent tomorrow to be prepared.

An amber wind warning is now in force for large parts of the country, including Kent, from 3am to 9pm on 18 February as Eunice sweeps in from the Atlantic and powers across the country west to east before heading out to the North Sea. The strongest winds in the South East are expected between 9am and 2pm.

The Met Office is forecasting there is a good chance flying debris could pose a danger to life and inland gusts of 60-70mph, potentially 80mph at times, are likely to damage buildings and bring down power lines. It means power cuts and other services, such as mobile phone coverage, could be affected.

Roads, bridges and railways will also be impacted and there will be delays and cancellations to bus, train and ferry services and flights. It is likely there will be falling branches and some uprooted trees. 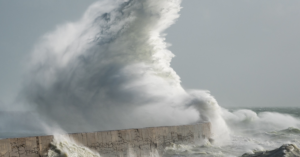 Toby Howe said: “The Met Office forecast is clear that Eunice is a serious storm that is expected to bring significant disruption to Kent.

“The strongest winds are forecast between mid-morning and mid-afternoon on Friday, and gusts could peak at over 80mph, making it likely to be the most powerful weather systems we have seen in Kent for many years.

“Driving conditions across the county will likely be dangerous at times, especially for high-sided vehicles, some bridges will shut and roads and rail lines could be blocked by fallen trees and debris.

“We all need to take the Met Office warnings very seriously and I urge everyone to take sensible precautions to keep safe and not put others, including the emergency services, unnecessarily at risk.”

Steps you can take to stay safe in a storm include:

BATTEN DOWN THE HATCHES AT HOME