Four men suspected of targeting a number of vulnerable and elderly residents by dishonestly pretending to be legitimate tradespeople were arrested during a day of enforcement action in Kent.

Nationally proactive and reactive enforcement action has been taken against active Doorstep Criminals, which in Kent resulted in four arrests.

A 46-year-old man from Orpington, a 24-year-man from Cranbrook and two men from Erith aged 20 and 31 were arrested on suspicion of defrauding vulnerable and elderly victims by overpricing for building work and repairs. They have all been released pending further enquiries. 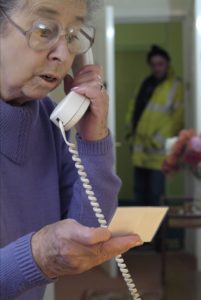 Partner agencies also conducted checks and searches at premises connected to suspected doorstep crime, illegal waste disposal and visited a number of farm and business premises to check workers employed at the sites.

A significant amount of Intelligence was also obtained during the week following a number of reactive visits and reports from residents responding to alerts issued by partners.

Superintendent Tim Cook from Kent Police’s Partnership and Crime Reduction Department said; “Rogue traders prey on the most vulnerable in society and we are determined to bring to justice these criminal gangs who are often responsible for stealing large amounts of money from those who can least afford it.

“This operation allowed us to work with other agencies to arrest offenders and gain some significant evidence relating to their criminal activities.

“Rogue traders need to be left in no doubt that we will find them and leave no stone unturned to seize any cash suspected to be proceeds of their crimes.”

Steve Rock, Head of KCC Trading Standards said; “I am delighted that this operation has delivered some great successes, helping to protect Kent residents and businesses.

“This would not have been possible without the continued partnership between Kent County Council and Kent Police.

“These doorstep criminals try to take advantage of people in their own homes, offering services or goods at overinflated prices, defrauding them of their hard earned savings, at the expense of legitimate businesses.  It is a priority of Trading Standards to seek out these serious and persistent offenders, disrupt them and, where appropriate, take formal action.

“We should all be wary when dealing with people that cold call wishing to sell goods and services.  People should always seek three quotations, seek advice from friends, family or neighbours or if in doubt always say no.”

To try and minimise your risk of employing a rogue trader:

For advice and information, members of the public should contact the Citizens Advice Consumer Service on 03454 040506, or visit the www.citizensadvice.org.uk.